Giving everyone on earth, including children, and experimental treatment that does not prevent either infection or transmission is an enormously bad idea, yet we did it anyway.  Now we have a virus that will not go away and thousands of people suffering and dying from vaccine injuries.

A clip from our full interview with pathologist, Dr. Ryan Cole, MD, @drcole12 in which he bluntly states that we are "paying for the sins of corrupt bureaucrats and pharmaceuticals."

Only a moron could think that this would not have caused problems.  So why did we do it then?  This was clearly not done to improve public health.  Was it, as Dr. Cole suggests done strictly out of greed?  I might not be the right person to answer that question since I am in no position to profit from the suffering of others.  Maybe we could ask Jacinda Ardern as she leaves the American head office of BlackRock Investments.

Thread..
reddpill2.0@ADailyDoseOfTr1
·
11h
Someone just got busted coming out of BlackRock. 👀 pic.twitter.com/5kqMaeJYhV

Curious that she would fly halfway around the world to visit a private investment firm during a pandemic isn’t it?  I guess she prefers cash to wire transfers. 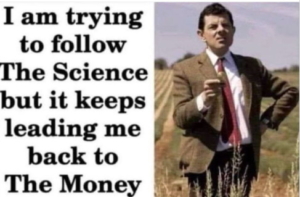