I have a friend whose father is waiting on a hip replacement.  Welcome to universal socialized healthcare, where waiting lists get longer as lives get shorter.  After waiting months, his father who is also a friend of mine, was finally supposed to get his surgery yesterday.  That didn’t happen.  I want to let my friend describe what did happen in his own words.

“So by the way, father was supposed to have surgery yesterday. Got admitted, everything going smoothly. Then they tell us….wait for it…. there isn’t an available nurse to care for him overnight. Unbelievable. Nothing wrong with the surgeon, no nurse available. Too many needed for the Rona. He was quite disappointed. Rescheduled to March 31. At least the weather is getting nicer for February he can go for little walks”

There is no way that the hospital did not know they were short of nurses when they checked him in for his surgery.  This was all theatre done intentionally to stoke hatred against unvaccinated people.  The Jason Kenney/Deena Hinshaw narrative is that unvaccinated people are plugging the hospitals causing shortages.  This has nothing to do with firing 1650 health care workers over vaccine mandates that were dropped yesterday.  Or even the ridiculous isolation rules that vaccinated nurses must follow when they test positive while being asymptomatic.  Asymptomatic is of course the new buzz word to describe people who are neither sick nor contagious.

It is possible that despite all the mismanagement that the hospitals really are overwhelmed with unvaccinated COVID patients.  So what is really happening in Alberta hospitals?  There are 65 unvaccinated people in the ICU with COVID as of Tuesday.  Our staffing crisis was caused by .0014% of the population requiring medical attention.

Canada has one of the most expensive health care systems in the world.  We are number 11 in spending per capita. 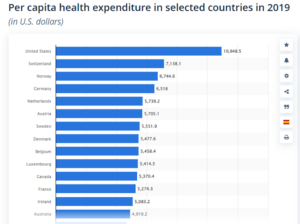 Our Premier, Jason Kenney, likes to brag that Alberta has the best funded system in Canada.  So Alberta spends more that the average in a system that is already one of the most expensive in the world.  By all accounts our system is lavishly funded yet it has been brought to its knees by 65 people?  We fired more unvaccinated nurses than that.  Did it even occur to anyone in Alberta Health services that before they start cancelling surgery they should recall the nurses that they fired?

The rot and incompetence in our health care system and government in general is the problem, not a seasonal virus.  People need to stop blaming unvaccinated for the failures of our government.  We need to start asking where all of the money went. 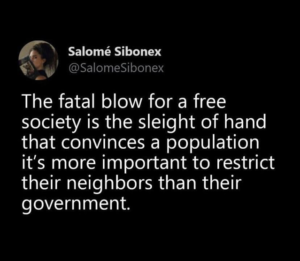 Subscribeto RSS Feed
Canadian Police Officers have a choice to makeThe Freedom Convoy is fighting for your Children’s Future, get off the...
Scroll to top