A Friend of mine sent me this article.

Pennsylvania State Rep. Christopher Rabb Says Parody Bill Calling for Vasectomies for Men 40 and Up Has Led to Death Threats

As you might imagine there was an immediate uproar over this bill followed by death threats.  Representative Rabb now says it was meant as parody.  The Bill certainly reads like a parody but so does the green new deal.  I sincerely doubt this was meant as a joke.  After all this is just the logical extension of vaccine passports.

A vaccine passport is a piece of paper affirming that the government has the final say over all medical decisions.  Your right to control your body is now gone.  If the government decides forced sterilization is necessary for the greater good then you will be sterilized.  What do you think would happen if one of the Trudeau children needed a kidney and you were a match?  How long would it be before the police break in your door to take you to the operating room?  Your only consolation would be that they did not need a heart.

The complacency of Canadians never ceases to amaze me.  There was almost no push back when vaccine passports were implemented.  People eagerly gave up the most fundamental of all rights, the right to control your own body.  All they got in return was the privilege of going to a restaurant.  Something humans have been doing for centuries without government approval.  Canadians deserve what is coming. 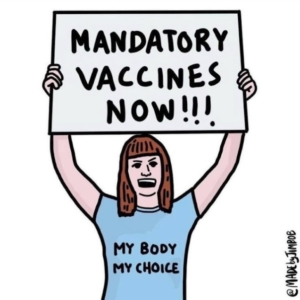 Subscribeto RSS Feed
Will we Slumber until Death? COVID Protection comes at an Unreasonable Cost
Scroll to top