Iceland has the highest vaccination rate in the world. 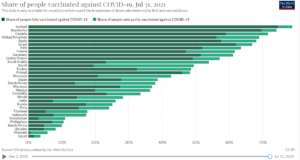 It is surprising that Iceland so aggressively promoted vaccines.  Due to their fish heavy diets Icelanders Have very high vitamin D levels.  Very few Icelanders are vitamin D deficient.  As a result Iceland had one of the lowest infection and death rates in the world.

Unfortunately for Icelanders the vaccines have changed all of that. 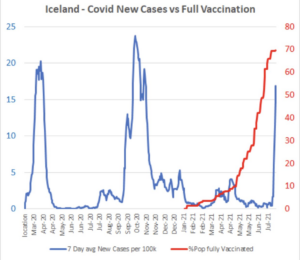 This plot is a few days old.  The plot below is more current.  Infections are now higher than they have ever been. 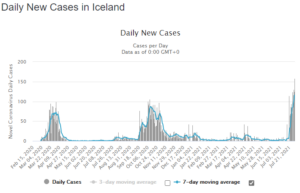 The timing of this outbreak should concern everyone.  Covid is a seasonal disease.  Last year the outbreak in Iceland start mid-September.  That is normal for a northern country.  The latest outbreak started in mid-July.  Summer infections of seasonal viruses are normally quite rare.  But that was before politicians decided to “help”.

With any vaccine there is a risk of antibody dependent enhancement (ADE).  I found a very good explanation of ADE on the Children’s hospital of Philadelphia’s web page.  I copied it for you below.

Antibodies that prevent entry into cells are called neutralizing antibodies. Many vaccines work by inducing neutralizing antibodies. However, not all antibody responses are created equal. Sometimes antibodies do not prevent cell entry and, on rare occasions, they may actually increase the ability of a virus to enter cells and cause a worsening of disease through a mechanism called antibody-dependent enhancement (ADE).

ADE occurs when the antibodies generated during an immune response recognize and bind to a pathogen, but they are unable to prevent infection. Instead, these antibodies act as a “Trojan horse,” allowing the pathogen to get into cells and exacerbate the immune response.

As you can see ADE is a well know and documented phenomena.  mRNA vaccines have been under development for decades.  When applied to Coronaviruses they always failed due to ADE.  Researchers were warning about this as a potential problem long before COVID vaccination programs started.  Here is a paper from last September.

ADE is one of the reasons that I chose not to be vaccinated.  No one explained how they had solved this problem.  Now I know why.  It appears that they did not solve the ADE problem they just ignored it and hoped we would not notice.

Many highly vaccinated countries are seeing a surge in infections.  Summer time infections should be rare but they are now becoming common.  In the animal trials ADE led to death.  I hope that does not happen with the COVID vaccines.

Unfortunately ADE is not the only way that these treatments can kill.  The plot below is from Britain.

Color me shocked.  Britain injected their entire adult population with a treatment prone to blood clots and heart attacks increased.  I mean really, who could have possibly seen this coming?  Our civilization is too stupid to survive.

A few days ago the CDC announced that they will no longer use PCR tests.  The primary purpose of the PCR tests was to produce false positives to keep the fear alive.  It was all an illusion.  Sooner or later even the sheep would notice people who tested positive were not sick.  Politicians needed a better tool to control the masses.  They have found it with the Vaccines.  Thanks to the vaccines make believe time is over.  Politicians now have real infections and seriously ill people to scare us with.

A cynic might say the goal of pharmaceutical science is to produce sick people to increase their customer base. 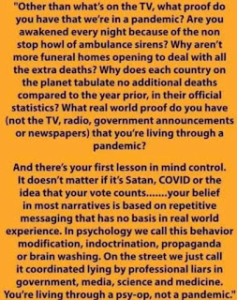 Subscribeto RSS Feed
Following the Non-existent ScienceVaccine Mandates were a Contingency Plan to Cover for the Inevitable Vaccine...
Scroll to top