Omicron is rapidly changing the COVID narrative.  It is not just unaffected by the vaccines, it seems to preferentially infect vaccinated people.  Data from multiple countries now show negative vaccine efficacy.  That alone should be reason enough to suspend the vaccine programs, passports, and mandates.  There is however something even more important that we should not forget; omicron is nothing more than the common cold.

In previous COVID outbreaks 2 weeks after infections start to rise hospitalizations and deaths start to rise.  That is not happening with omicron.  The data below is from the province of Alberta. 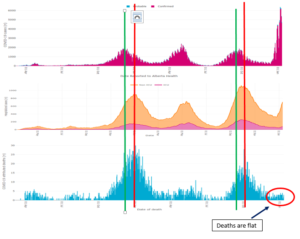 COVID has never constituted an emergency.  It started as a bad seasonal flu and in 2 years has mutated in to the common cold.  A cold that is so transmissible that 90% of the unvaccinated have already been exposed and have antibodies.

The virus is no longer a threat and the vaccines which have always failed in the lab have now failed outside the lab.  This should be the end of the COVID road, instead we seem to be at a cross roads.  Some governments are looking for an out and backing down.  Japan, Germany, and Spain have all either rejected or softened their stance on vaccine mandates.  It is only the real sociopaths like Canadian, Australian, and Austrian politicians who are doubling down on the failed vaccines.

The amoral psychopaths in these countries like Quebec’s premier will have a fight on their hands if they continue their murderous ways.

Right now these evil bastards are smug because the police have been willing to bust heads for them.  What happens when the police start to get cold feet?  We might be seeing the first signs of that in Austria.

The police don’t want a vaccine mandate because they know there will be violence.  Police officers are becoming uncomfortable with brutalizing citizens over the common cold.

Some will dismiss this because it did not come from the police union.  The Union has not and likely will not take a stance opposing the government.  But that does not mean their members agree.  Officially unions protect workers’ rights, unofficially they do just enough to expand their base.  More union members means more union dues and higher salaries for the union leadership.  Unions are just another level of government that workers are forced to pay taxes to, and all forms of government are corrupt.

Union leadership will not help.  We have already seen that in Calgary where the police and firefighters union did nothing to protect unvaccinated members.  That does not mean that the union members are on board.  We are at a crossroads and the path we take will depend on the police.  Not the decisions of the union but the individual decisions of the union members.  Police officers can stand down and we can go back to normal or they can charge in swinging their batons.  The next few weeks in Canada will determine how far in to tyranny we slide.