In the Herald this weekend there were several stories about the US election.  Every story that mentioned that Donald Trump alleged voter fraud was careful to add “without providing proof”.  It is a shame that the media does not use the same degree of skepticism for the Covid lock down crowd.  The Herald gave almost a full page to Dr. Lynora Saxinger from the University of Alberta.  Dr. Saxinger used her pulpit to lie several times.  The Herald did not find it necessary to add “without providing proof” to anything she said.

The first lie was the very premise of the article.  The article was titled “There is a Third Option”.  The third option is a circuit breaker.  What is a circuit breaker?  It is harsh 2 week lockdown.  A Rose by any other name would smell as sweet.  A lockdown by any other name would smell as putrid.  Renaming a lockdown a circuit breaker does not suddenly make it not at lockdown or any less evil.  This is not a new third option it is the old option that did not work last time, repeated with more desire.  Is there any doubt about which direction Dr. Saxinger’s leans in a stiff wind?

To convince us that this is somehow new and necessary Dr. Saxinger tells several supporting Lies.  Dr. Saxinger states that the first lockdown worked and that it bought us time.  What worked was the arrival of summer and we squandered that time planning another lockdown rather than doing anything constructive.

The good doctor was not content with just Lying about how well our lockdowns worked she found it necessary to lie about what is happening in Sweden and how herd immunity is not possible.  She stated that Sweden’s approach did not work because a lot of people died and that even Sweden is re-imposing restrictions.  I have a news flash for the Dr. a lot of people died everywhere not just Sweden.  Sweden is just about the only place where people are not dying with Covid right now.  Sweden also did not imposed restrictions.  They just issued new guidelines that still remain voluntary.  See the plot below and you tell me if you think the Swedes were wrong. 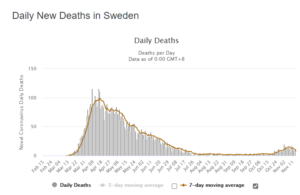 Sweden had a small blip of deaths at the start of influenza season that is already trending back down.  Sweden, with one of the oldest populations in the world has now fallen to 20th place for deaths/capita and will be passed by at least 3 more “younger” countries in the next few weeks.

Her “proof” that herd immunity was not possible was that we have seen re-infections.  I tried to find out how many and the highest number I could find was from this article.

The article is not specific but mentioned a couple dozen.  The only other article I could find from August put the number at 5.  55 million people have already been infected.  Two dozen is a 0.00004% reinfection rate; if you believe that they were re-infected at all.  Twice now these 2 dozen people have had flu like symptoms and a positive PCR test.  You know who else has had more than one positive PCR test?  Elon Musk, in the same day this week he had 2 positive and 2 negative tests.  The singer Erica Badu also had 2 tests from the same lab the same day.  Her right nostril was positive and her left nostril was negative.

Dr. Saxinger wants to lock you in your home for 2 weeks or 2 years, whatever it takes.  The only way she can justify her conclusion is to lie and the Herald is OK with this.  It looks like the only way the Herald will ever be skeptical about lockdowns is if Donald Trump comes out in favor of them.  Our society deserves better than Dr. Saxinger and we sure as hell deserve better than the Calgary Herald.