I have done multiple posts showing that since the start of vaccination programs we have been seeing unusually high deaths among younger people.  Just yesterday I posted data showing that vaccine injuries and deaths have been systematically under reported.  Examination of European data shows vaccine deaths are 20 times higher than the official numbers.  Now this morning I find this.

No one tracks death trends more carefully than insurance companies.  They set insurance rates based on the statistical averages of how many deaths they can expect in each age group each year.  Insurance companies are highly profitable, they could not be without very accurate statistics.  If we really had an emergency the alarm bells would ring first in the insurance offices.  For the first time in this fake pandemic the alarm bells are ringing and ringing loudly.

We did not hear much from insurance companies before now for 2 reasons.

Things changed in 2021.  Now working age people are dying in alarming numbers.  Working age people with dependents almost always carry life insurance.  Even some without dependents are rolled up in group policies paid for by their employers.  Insurance companies are now feeling the pain and that should alarm everyone.  A social welfare state cannot exist without workers to tax and our workers are dying.  If this continues the effects will be felt by everyone not just the families of the vaccine victims.

With every fake crisis I always give the same challenge to every Karen; “show me the bodies”.  I once had someone tell me that Alberta must immediately shut down all of our coal fired generation because of climate change.  Coal generated (and still generates) more than 50% of all the power in our province.  I gave them my standard challenge.  I told them that we could go to any cemetery so that they could point to the headstones of people killed by climate change.  After that I would provide them a list of millions of people who were saved and led far easier lives because of the cheap electricity the coal had provided.  The trip to the cemetery did not happen.

When the professional liars (politicians and media) told us we had a desperate viral emergency, the first thing I did was start tracking deaths.  It may be macabre but counting the bodies showed me that we did not have a problem.  One heavy cold and flu season does not herald the extinction of the human race.  Especially since the unfortunate victims were seniors. 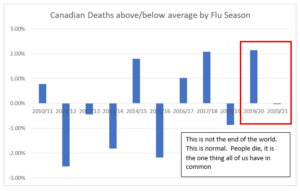 It is sad but completely normal for seniors to die in cold and flu season.  It is also normal for some years to be worse than others.  We spent billions and destroyed lives in a misguided effort to eliminate cold and flu season.  What is happening now is not normal.  Young healthy people are dying.  We now have manufactured an emergency.  I know we are having an emergency because I can go to the cemetery and count the bodies. 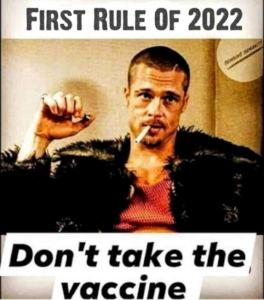 Subscribeto RSS Feed
We are in a War that only one side is FightingHow many People can we Wake up in 2022?
Scroll to top