Today is the Remembrance Day; a day set aside for us to reflect on the sacrifices previous generations have made for us in wartime.  We did not get this holiday quite right.  It is not important to remember the sacrifice if we don’t remember the reasons for it.

Previous generations fought and died so that we could maintain freedom.  These people are/were true heroes and patriots.  It is too bad their children and grandchildren turned out to be such assholes.  They celebrated freedom others bled for by giving it back to government.

I have been on this earth for nearly 6 decades.  Since I have been old enough to understand I have watched freedoms be eroded by government.  With each passing year government became larger and the rules more onerous.  I was always alarmed by this because the trend never changed.  It did not matter which party was in power, they all did the same thing.  It was obvious that they were slowly eroding freedom yet most Canadians did not notice.

Most Canadians were too concerned with planning their next holiday to realize that they soon will not be allowed to take holidays.  Our borders are sealed for some and the Moronic Man-child is openly musing about limiting how far anyone can travel.

I know the government is not my friend.  I have known this since I was a teenager.  This has made me very cynical about anything government yet even I was shocked at how quickly things have moved in the last 2 years.  More shocking than that, though, is how many Canadians still don’t get it.  For those of you who still refuse to understand I will make it simple for you.  82 years ago Canada joined a war.  45,000 Canadians died fighting a government that did this. 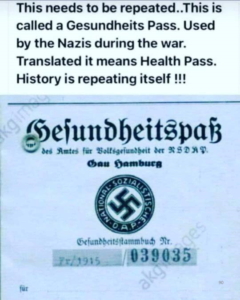 Everyone one of those people are rolling in their graves right now.