A Dutch study came out last month.  The study looked at Hospitalizations and ICU requirements for vaccinated COVID patients.  Can we finally stop calling the clot shots vaccinations?  If they were vaccinations there would be no such thing as a Vaccinated COVID patient.  Semantics aside their study had some very important findings.  Vaccinated people are more likely to develop severe COVID and require hospitalization than unvaccinated.  The effects also get worse with time.

This pandemic of the vaccinated is not restricted to The Netherlands.  I was watching Alberta data for months.  Every week the percentage of vaccinated people in the ICU was climbing.  After boosters were introduced the problem accelerated.  Eventually there was only one unvaccinated COVID patient in the ICU.  The next week all that data was gone from the web site.  Obviously the government did not want to show that 100% of the people in ICU had been vaccinated.

The shots provide only temporary partial protection and with time they make things worse.  I don’t know why that is surprising because that is what happened in previous animal trials.  For a treatment to be considered a vaccine it needs to provide lasting immunity; it cannot do that without invoking a T cell response.  Below is what Alex Berenson had to say about the Jabs and T cells.

The promise that the mRNA shots will produce durable T-cell protection against severe disease appears faulty. Any protection the shots offer against hospitalization or death probably results from their antibody-driven protection against infection, which lasts only a few months.

We did not need to wait over a year to understand this.  The way the Jabs were designed they cannot produce a T cell response.  Even a lay person like me could figure that out with a little logic and internet research; something I did and posted about over a year ago.   Below are my words from August of 2021 when I said almost exactly the same thing Alex Berenson.

Next I looked up how the mRNA and Viral Vector Vaccines work.  They both do the same thing.  They reprogram some of your cells to produce the spike protein.  This provokes an antibody response to the spike protein.  One thing that struck me was that there really were no infected cells.  I wondered if that meant there was no T cell response.  I searched all of the literature I could find to see if any of them mentioned T cells.  All I found was one vaccine manufacturer stating their treatment “might” produce memory T cells.

I found this odd.  If we can find something as small as a virus why can’t we detect a much larger T cell?  Obviously they did not find T cells.  The Vaccine maker was just giving an answer the interviewer wanted to hear.  So from my own research and a little logic I was able to determine that without T cells these treatments would be temporary and would not prevent infection.  Or even disease for that matter.  The whole endeavor took about 2 hours of internet searching.

I did the research described above much earlier than August.  My first post warning about the temporary nature of the jabs was in May of 2021.  At the time of the post less than 30% of Canadians had been jabbed.  My point is that we did not need to wait for data to know we were making a mistake.  It was obvious from the design that the protection was only partial and temporary.  What is the logic of forcing people to take a temporary treatment with no long term safety data?  Almost no one was at risk from COVID.  Healthy people under 70 had no reason to take any treatment let alone an experimental treatment.

Adults took the Jabs because they were too lazy to do any research but adults are free to make mistakes, even deadly ones like trusting government.  Children on the other hand rely on adults for protection and adults have failed them miserably.  The same adults who did not bother to do any due diligence before their own injections are now lining up at pharmacies to inject their children.  Adults who do bother to do research are shunned and even ignored by spouses more concerned with virtue signal than protect their child.

A friend sent me this audio file this morning.  Every parent needs to listen carefully.

Healthy children do not die from COVID.  There is no reason to subject them to any risk even if you believe the risk is trivial.  The pharmacist’s statement that the benefit outweighs the risks is just plain stupid.  There is no risk until you vaccinate your child.

I will never understand how people do this to children.  I know why government does it.  Government is the preferred occupation for sociopaths.  People in government do not care and by now it is obvious that they are somehow benefiting from these policies, but what about anyone else?  Why would a pharmacists or a nurse be part of this?  Why would they give an unnecessary, experimental, treatment to a child?

The truth is governmental sociopaths do not commit murder without help.  Justin Trudeau, Jason Kenney, Joe Biden, Nancy Pelosi, Jacinda Ardern; none of these sociopaths personally injected anyone.  They all paid Doctors, Nurses, and Pharmacists to do it.  Every one of those people had a choice.  They all could have refused.  At the very least they could have warned their patients but as this pharmacist pointed out, had they done that no one would have taken the jab.

Everyone who went along to get along is part of this crime.  They are all child killers but it is never too late to stop.  Just say no.  You can be a Doctor, Nurse, or pharmacist without injecting another child.  If government wants to commit murder let them get their own hands dirty.  I would love it if Jason Kenney showed up on my doorstep and tried to inject me or one of my children.  It would not turn out the way he envisions. 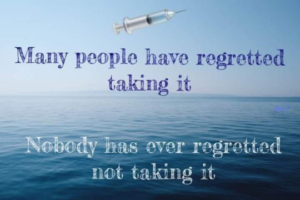 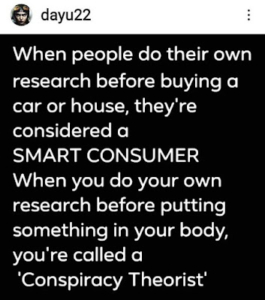 Subscribeto RSS Feed
Despite what Fauci says, Scientists are not ScienceCOVID Policy is the only issue in the next Election
Scroll to top