Another day another person drops dead in front of an audience.

This is not normal but shockingly people are willing to accept that it is.  When COVID hysteria started people were alarmed by videos out of china showing people dropping dead on the street.  Everyone was afraid because in 2019 everyone understood that it was not normal for relatively young people to drop dead in front of everyone.  Fast forward to 2022 and no one understands that any more.

The Chinese videos, as with everything on the evening news, turned out to be fake but what is happening now is very real.  Young people with no obvious signs of illness are dropping dead everywhere.  These very real deaths are accompanied with surreal reactions.  A young mother failed to wake up from her nap on a flight from Hong Kong and the news reported it like it was a perfectly normal experience.

I have been on a lot of planes but I have never been on a plane were passengers died from napping.  It might just be me but none of this seems normal and it certainly does not seem normal that no one is curious about what is causing this.  Britain is currently seeing nearly 2000 excess deaths per week and, as Mark Steyn and his guest discuss, the UK government could not be any more disinterested.

'The excess deaths are a combination of things… It's a lack of medical care, patients affected by Covid, and vaccine adverse reactions.'

Mark Steyn’s guest gave 3 possible explanations of the growing pile of bodies; the vax was one but he was not willing to admit that it was the primary reason.  His guest was already black listed on twitter and I guess he was a little gun shy about being any more controversial.  I am not on twitter nor do I understand why the truth should be controversial so I can tell you it is the vax.  Lack of proper medical care or lockdowns do not explain how people with no outward signs of distress die suddenly without warning.

The official vaccine injury statistics are bad but not to the point of alarm because most vaccine injuries are not recorded.  Doctors are carefully avoiding upsetting the government by recording the cause of death as unknown even though they know damn well what it is.  The official statistics are corrupted by fear of government.  That is why Steve Kirsch bypassed the system and queried people directly.  Steve asked his followers to fill out a survey and to no one’s surprise it showed vaccine injuries are far more common than any public official wants to admit.

Steve Kirsch also encouraged people to leave comments with their completed survey.  Take a look at the incredible list of vaccine injuries this woman has compiled.  Incredibly this list is people she knows personally or friends of friends, a single degree of separation.  The longer this goes the worse it gets yet some people still refuse to believe we have a problem even when it happens to them.  A friend sent me this testimonial from the most clueless person on earth.

She did everything Fauci guaranteed would keep her from suffering serious illness and still got seriously ill.  Somehow the complete failure of the precautions vindicates her decisions.  Willfully blind and willfully ignorant.  This describes far too many people and it is why we did not stop this obscene experiment a year ago.  It truly is hard to understand how our species ever climbed down out of the trees to dominate the planet. 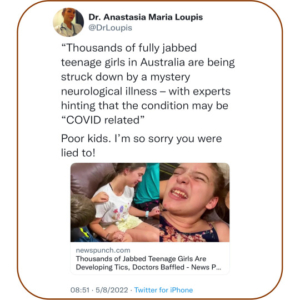