Anthony Fauci was in front of the senate again this week.  Last time Fauci appeared for the senate he lied.  That is not surprising.  Anthony Fauci is one of the least honest people on the planet.  He is another in a long line of bureaucrats who somehow became a multi-millionaire on a government salary.  The surprise this time was someone finally called him out on his lies.

Of course that someone was Rand Paul.  Rand Paul is a political unicorn.  He is smart and may even be honest.  At the very least he is way more honest than Fauci, but that bar is admittedly very low.  Watch their heated exchange in this video.

Notice that Fauci does not answer the question about whether he funded gain of function research.  Instead he tries to convince you that what he funded is unimportant because this virus is natural and not man made.  Fauci points to the single paper supporting natural origins of the virus.  He wants you to believe that this is the “settled” science.

Settling science is the favorite pastime of leftist tyrants.  No real scientist ever settles science.  Science is constantly argued.  Fauci is conveniently ignoring other papers with evidence the virus has no natural origin.  Science is never settled but eventually it becomes accepted, until a better explanation comes along.

Accepted science is not even called science any more it is called Engineering.  From that standpoint I do agree with Dr. Fauci.  Some of the COVID science is defined well enough to become engineering.  Like the part where this virus is definitely engineered.

There is increasing pressure on Fauci.  He might be held accountable for what he has done.  If so, he would be the first real COVID casualty.  This is still not certain.  It seems he is being thrown under the bus but he is still not without support.  Most of the media is still defending him.

This “journalist” is pulling a Fauci himself.  Notice he is not refuting what Rand Paul said.  He is just challenging Rand Paul’s qualifications to say it.  Just as Fauci did in the hearing.  This is a well-worn tactic of the left.  Pretend to have the moral high ground by declaring only people that you approve of are qualified to speak.

The Climate change zealots have been doing this for decades.  Only climatologists are allowed to speak about climate change.  This is not how science works.  William Happer is a Nobel Prize winning physicist and climate change skeptic.  Global warming zealots constantly try to marginalize him by pointing out that he is not a climatologist.  To this he answers he does not need to be a climatologist to point out that they have the physics wrong.

Of course the left slices things even closer than a broad specialization.  Dr. Tim Ball is the first Canadian to receive a PHD in Climatology.  He also does not believe CO2 is a problem so the media ignores him.  He is not the right kind of climatologist in the same way that virologists who claim the virus is manmade are not the right kind of virologist.  Are you sensing a pattern here?

I sincerely hope the public sees around these tiresome tactics and Anthony Fauci pays for what he has done, but it cannot end there.  Fauci is not the only one who needs to go to prison.  This will not end until everyone involved is punished.  I am not just talking about the politicians that forced this farce upon us.  What about other bureaucrats like Fauci who actively participated?  Bureaucrats like these English police abusing protestors.

Welcome to the “new normal”. Yep. This was the British police back in sept. Dark. Totalitarian. “Shocked and horrified” were my words then. This still haunts me. When did #democracy die? pic.twitter.com/oHdIQRfzy1

This was from last September but it was not an isolated incident.  There are videos from all over the world of police and health officials overstepping their authority.  Some of these people need prison others need to be fired and lose their pensions.

This will never be over until the people who caused it are removed.  If we leave any of them in place they will do this again.  We will be locked down again next flu season, or anytime the government finds it convenient.  You don’t need to believe me.  Judge for yourself.  Consider the actions of 2 famous pandemic architects.  Bill Gates and Klaus Schwab just became partners in a COVID testing company.

Bill Gates and Klaus Schwab know this is not over.  They probably also know the planned lockdown dates for every country.  Well maybe not every country.  Just the ones rich enough to buy their products. 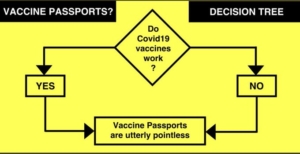