The study is painfully, obviously, false.  I know that because the proof came from computer modelling which makes this junk science since computer models are not science.  My analysis did not go any further than that simply because I am sick to death of computer models being held up as science.  Canadians are paying $2 per liter of gas now because climate models “prove” that plant food is destroying the planet.  These models also cannot history match actual recorded data; they are not science and they are not engineering either.

I might not have taken the time to look at the details but Byram Bridle did, and guess what, a detailed analysis of their model shows that it is junk science.  I did not need to read the paper to know that it was junk science just as I did not need to research the author to know that he was being paid to say that everyone on earth needs to be vaccinated multiple time until they die.

David Fisman has served on advisory boards related to influenza and SARS-CoV-2 vaccines for Seqirus, Pfizer, AstraZeneca and Sanofi-Pasteur Vaccines.

This paper should be retracted and the Globe and Mail should issue an apology with a follow up article correcting their mistakes.  I won’t hold my breath waiting for either to happen.  In 2022 dishonest academics and journalists are the norm not the exception.

Unfortunately for Canadians this fraudulent study is just the first salvo in a campaign of lies leading to forced vaccinations.  The second attack was the Theresa Tam interview and today we have this from the Edmonton journal.  The journal is trying to marginalize vaccine hesitant people by framing them as irrational.  They must be because they believe in vaccine myths.  Below is the list of “myths” from the article. Let’s take a minute and examine each one of these statements that the Edmonton Journal has branded as a myth.

The normal protocols were set aside and the vaccines were developed much more quickly than normal.  Pfizer’s own test data was contaminated by unblinding the participants and not following up on more than 80% of the suspected cases.  The fact that more people died in the vaccine group than the placebo group and that some in the vaccine group developed permanent serious disabilities should concern everyone.

Yes I would say that sudden death is a serious side effect. 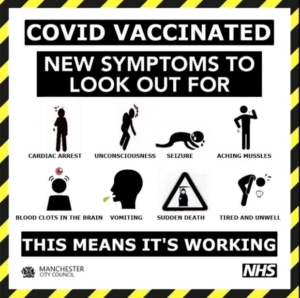 The lipid Nano particles that carry mRNA into the cells have been shown to concentrate in the ovaries.  If the lipid Nano particles are in the ovaries where is the messenger RNA?  Also since the start of vaccinations miscarriages and still births have increased substantially.  Until these phenomena have been studied you cannot conclude that the vaccines do not affect fertility; the smart assumption is that they do.

This has already been shown in the lab.  It is only a matter of time before we discover it in humans.

Some manufacturers have already admitted they do use fetal tissue and researchers are still trying to identify the proprietary ingredients.  Since we don’ know what these substances are we do not know that they are not controversial.  I do know it is not a good idea to inject them given the problems we have seen.

I doubt this but it is clear that getting the vaccine ultimately makes you far more likely to get COVID.  Data from all over the world shows this.

I don’t know about this but I do know the QR code on your vaccine passport does allow the government to track you so what is the difference?

It turns out that not a single one of these statements are myths.  Most of them are absolutely true and the others are closer to truth than myth.  The only myth here is that you can find honest journalism at the Edmonton Journal.