I pulled this video from Ivor Cummins twitter feed.  It illustrates the insanity of the current vaccine debate.

This fellow was able to see the humor in the vaccine mandates but unfortunately at this point it is gallows humor.  It is impossible to think that the mandates are not part of a more sinister plan.

I was sent the following 2 videos by 2 different people yesterday.  They are both worth watching although you need some time for the second one.

This first video details how Remdesivir was used exclusively in America. When I watched this video a light went on.  Early on in the Pandemic I was tracking deaths.  I found historic data for a few countries and I was comparing the 2019/20 cold and flu season to historical averages.  What I found was that the COVID deaths seemed to be over reported.  Every country had a spike in the spring of 2020 but the spike was not large enough to account for the official COVID death total.  In Canada the spike only accounted for about 60% of the deaths and in Sweden it was about 50%.

I concluded at the time that Health authorities were listing COVID as the cause of death on non-COVID deaths.  They were obviously inflating the numbers to scare people.  There was one exception, the US.  In the US the official COVID total was almost exactly accounted for in the death spikes.  I thought this was odd.  Other countries had to inflate the numbers to scare people but the US did not.  Excess numbers of people in the US were dying.  I could not figure out why the US was so different than most other countries.

After watching this video I now understand.  Remdesivir was used to kill people.  The deaths were all listed as COVID and, of course, Anthony Fauci was orchestrating it.  Watch the video and decide for yourself.  Sorry I can’t embed the video.  You must follow the link.

The next video carries much the same message.  Since Anthony Fauci was hording all the Remdesivir, the NIH had to find another way to kill people.  Their solution was to overdose seniors in care homes with a sedative.  This killed 2 birds with one stone.  It pumped up the COVID numbers and cut costs.  Care homes in Britain are government funded.  People in care homes are expensive to keep alive.  This was government cost cutting on a whole other level.

Some countries chose creative accounting to inflate their numbers.  The US and the UK chose murder.  All of this to force a needle in to your arm.  The Jabs are most definitely not for your health.   The Jabs do seem to have a purpose and it is not to eliminate a virus.  Governments appear to be culling the herd.

I have a friend who is as cynical as me when it comes to Government.  He too can’t find a reason for the jabs other than government sponsored genocide.  He has been watching Euromomo carefully for any excess deaths and frankly right now it is hard to see.  But that is the point of the jabs, isn’t it.  Deaths from the Jabs is a slow moving freight train.  Some people will die quickly others will die much later from various immune system problems.  We won’t see a huge spike just a gradual increase in mortality from a myriad of maladies.  All the government must do to keep it going is keep us lining up for boosters.

We are witnessing pure evil.  If you support boosters, mandates, and passports not only are you misguided.  You are complicit with murder. 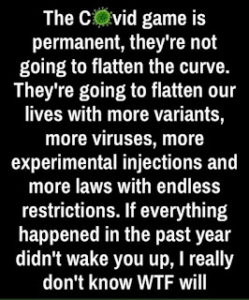 Subscribeto RSS Feed
COVID Vaccines could be the largest Crime in HistoryWhen will Canadians wake up and smell the Vaccine Failure?
Scroll to top