My phone just squealed with an emergency alert.  Jason Kenney desperately wanted me to know that it is now his responsibility to determine who I can have in my home.  I find it really odd because I don’t remember putting Jason’s name on my title yet somehow he now owns my house.  Without making a single payment or paying his share of the taxes and operating costs, Jason somehow acquired a controlling interest in my house.  This Pandemic has been very profitable for him; I suspect he now has controlling interest in a lot of real estate.

Jason found it necessary to intrude on my property rights in order to stop the spread of Covid 1984.  Coivd 1984 is the deadliest virus in history that somehow has yet to produce a single excess death in Alberta.  See the plot below updated with the latest data. 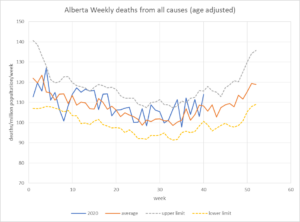 Just think how hard Jason would have to trample my rights if an Albertan actually died from covid.  I would have to pay him to take my house from me.  Although I admit I am still a little hazy on how eliminating property rights discourages a virus from infecting people.

The pandemic has not just been profitable for Jason; it has been very good for very rich people.  It turns out when the government closes your competitors your company does quite well.  That was no doubt surprising to the 44 richest people in Canada.

It might just be the cynic in me but I can’t help but wonder just how much those 44 people “contributed” to have the government shut down their competitors.

If you are not one of the 44 richest people in Canada the government is a lot less benevolent.  I know small businesses that have been threatened with fines up to $100,000 if they dare to make a living.  If the threat of fines is not enough the government will send the stasi police to intimidate you as they did with this Toronto restaurant owner.

With the number of officers they sent I guess they thought this guy was selling meth not Barbeque.  The owner of the restaurant was undeterred and when he opened the police came back in force to arrest him and tackle a few of his supporters.

When I was a kid policing was a noble profession.  Those police officers would have been embarrassed by what the officers in the video did.  Serving Barbeque should not be a crime.  Policing in this country is just another thing ruined by politicians.  The politicians got involved and started choosing police chiefs based on their political beliefs and not on their qualifications as a police officer.  Now we see the result.  We have thousands of people who should have never been given a badge and a gun.

This is the country we live in now.  Illegally blocking highways and rail ways will attract zero police attention.  Serve barbeque and the cops will spill out of the donut shops to beat you with their night sticks.  Try to open your gym and lose $100,000.  Fly to a foreign country and kill people and we pay you $10,000,000.  Canada is fundamentally and possibly irreparably broken.  People like Jason Kenney, Justin Trudeau, Deena Hinshaw, and Theresa Tam have broken Canada.  In a just world they would face prison time.  Instead they will sit on beaches sipping cocktails with the 44 people they made even richer while breaking what was once a great country.

At least there is a glimmer of hope south of the border.  When the 21st century’s most prolific serial killer decided to throw his weight around the police pushed back.