From the beginning of this my wife has been saying this makes no sense.  In her words people have either been bribed or threatened.  We saw in Australia that politicians were bribed.  But you can’t bribe everyone.  What is the point if 100% of your profits go towards bribes?  You need to only bribe those with the power to threaten the rest.

With doctors there is the implied threat of losing their medical license and income.  When that does not work more overt threats are necessary.  The 2 videos below are 2 different doctors being interviewed.  Both interviews are lengthy and have very good medical information.  To me the most important part of both interviews is not the medical information.  It is that both Doctors have been threatened for not staying on script.  In one case a suspicious fire started near the doctor’s clinic that burned down the entire town.

The First interview is a Canadian doctor who was searching for ways to treat patients that have been injured by the vaccines.  He performed D dimer tests before and after on his vaccinated patients.  You know actual science.  He found the jabs caused blood clots in 62% of his patients.  He has been persecuted for performing useful but inconvenient science.  Sorry I can’t embed this one you must follow the link.

The second interview is an American doctor being interviewed by some sort of Israeli committee.  The Doctor is very blunt.  The vaccines are unnecessary and dangerous.

Both of these doctors have taken great risk to point out that none of this has been done for your safety.  Quite the opposite in fact.  What Governments have done in the last 2 years is nothing short of mass murder.  How many people need to die before the average person wakes up and sees this? 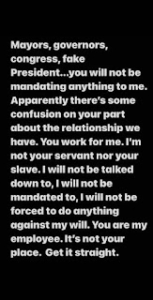 Subscribeto RSS Feed
Has the Other Shoe just Dropped? COVID 19 is a Criminal Conspiracy and Fauci is in the Middle of it.
Scroll to top