In the following Video Ron DeSantis is answering a question about President Biden’s vaccine mandate.  During his answer he points out something that I discussed over a week ago.

Now that almost everyone is vaccinated the US has 300% more COVID cases.  This is a happening in every heavily vaccinated country in the world.  Last summer with no vaccines we had no problem.  This summer with vaccines we have a problem.  For anyone capable of critical thought that would indicate the vaccines have made things worse.  Most people are just not capable of critical thought.

Yesterday there was a federal election in Canada.  Nothing changed.  Only one Party campaigned to restore freedom and rein in the tyranny of the provincial premiers.  That party was the People’s Party of Canada (PPC).  They received only 5% of the vote and failed to elect a single representative.  95% of Canadians chose tyranny.  95% of Canadians are not capable of critical thought.

Parties that support forcing people to take unnecessary and harmful medical treatments captured almost 100% of the vote.  Canadians aren’t just stupid they are also sadistic.  If Canadians were not so stupid and sadistic they might have noticed that while no country has had success with vaccines 100% of the countries using Ivermectin have had success.  El Salvador is another good example.

Canada chose lockdowns and mRNA vaccines.  We were told they were following the science.  That is a little hard to swallow since neither lockdowns or mRNA vaccines had ever been used before.  When does science ever tell you to go all in on something that has absolutely no data supporting it?  Canadian politicians looked down on countries that used Ivermectin even though Ivermectin has solid science backing it up.  So which approach was correct?  The Canadian pseudo-science or actual science.  Maybe this plot can tell us. 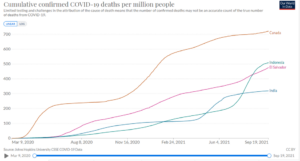 India, Indonesia, and El Salvador used Ivermectin and have about half as many deaths as Canada.  None of those countries is dealing with surging infections from ADE either.  When are we going to stop jabbing people and just distribute Ivermectin that sane, rational countries are already having success with? 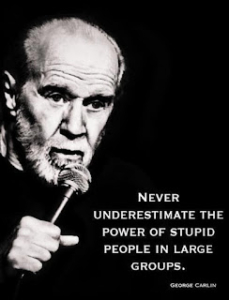 I can’t be certain but I believe George Carlin is describing Canadian Federal elections.