We certainly live in interesting times.  There are fault lines opening all over the world because of COVID.  Some countries like Britain, the Czech Republic, and Japan are turning away from the vaccines.  They are joining countries like India who never placed much faith in the vaccines opting instead for proven therapeutics like Ivermectin.  Meanwhile other countries are doubling down on stupid.  Austria and Australia have both voted for mandatory vaccination.  The plot shows COVID deaths for vaccine loving Austria and science loving India. 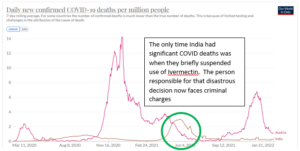 India is clearly outperforming Austria.  Japan also used Ivemectin to control the outbreak that was caused by the vaccines.  Iveremectin has reduced infections and deaths everywhere it has been used.  The vaccines have not.  The better option is obviously Ivermectin so why are countries like Austria not mandating Ivermectin?

Of course, by now we know the answer to that question.  This has never been about trying to save lives.  If it was you would not be shunning a treatment that works in favor of one that increased the number of deaths in the clinical trials.  The vaccines produce the deaths, which produce the fear, which makes the great reset possible. 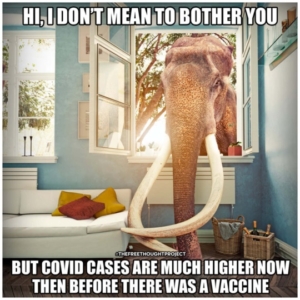 Canada has yet to declare which side of the stupidity line they want but the signals are clear.  We are headed to mandatory vaccinations.  Quebec is now fining unvaccinated people.  On top of that “vaccinated” in Quebec now means 3 doses.

The rest of Canada has not yet added fines to their list of vaccine coercion techniques but not a single one of them have moved away from vaccine passport either.  They are simply waiting to see if the vaccine fines in Quebec result in any political injuries.  You can bet that if Quebecers knuckle under, we will see fines in every province.

While the other premiers are waiting on the results out of Quebec, the gas lighting of Canadians continues. A friend sent me this a few days ago.

Living for the moment: Study points to cognitive differences in people who are vaccine hesitant | National Post

The national media and a few left wing academics have teamed up to convince unvaccinated Canadians that they just are not thinking straight.  They are trying to shame people in to vaccinating by pointing out that refusing the vaccine is a result of short term thinking.  Here is a quote from the article.

“There is a slight, but reliable, tendency for vaccine-hesitant people to be a little more sensitive to near-term rewards,” Hall said in summarizing the findings. 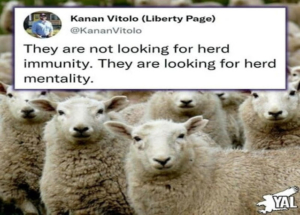 Governments know that they cannot convince unvaccinated people to take the jab using data and logic since data and logic do not in any way support vaccination.  Instead the government relies on social pressure.  Social pressure that comes from all angles, even children.  The Quebec government and media have sunk to a new low using Children as propaganda tools.

Using jabbed Children as propaganda tools is almost as disgusting as jabbing them in the first place.  This is child abuse broadcast on a major network.  Sooner or later the most compliant population on earth will wake up and smell the tyranny.  When that happens, as this Aussie points out, it will not be pretty.