Embalmers in the US are finding the same strange clots that Embalmers in England have been reporting for months.  I have posted data on this before so this issue is not new.  At first I was not going to re-post anything on these strange proteins but it triggered a burning question I have had for some time now.  Why was it necessary to reprogram people’s cells to produce foreign proteins (the spike protein)?

The Idea behind the mRNA (Pfizer, Moderna) and adenovirus (J&J, AstraZeneca) vaccines is to teach your body how to make spike proteins.  Your body’s immune system will react and produce antibodies which will give you partial, although temporary, protection from COVID.  So if you boil it down the essence is to expose your body to the spike protein to provoke an immune response.  Why take such a circuitous route?

I have mentioned many times that I am an engineer.  I am often hired to solve a problem and one thing I have learned over the last 35 years is that the simple solution is always the best solution.  If you want to expose someone to the spike protein, why don’t you simply inject the spike protein?  Why mess with their DNA and hope their body produces the spike protein correctly?

The mRNA vaccines can’t even work without first suppressing the immune system.  How do you strengthen the immune system by weakening it?  I would be very wary of any proposed solution that was going to make the problem worse before it makes it better.  The only thing you can count on in that situation is step one where the problem gets worse. 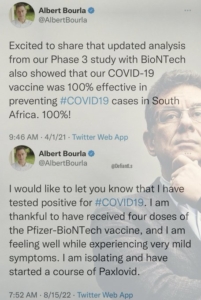