When the vaccines were rolled out in December of 2020 we were told that the vaccines would end the pandemic which would have been great news if it was true.  No one asked the obvious question, how is a technology that has failed 100% of the time in the lab going to magically work by giving it to everyone?  Not only did Coronavirus vaccines have a perfect record of failure in animal trials they also had a perfect record of causing injuries to the lab animals.

The obvious conclusion was that COVID vaccines would not stop the pandemic and would cause serious problems.  Instead of accepting reality Governments adopted a policy of wishful thinking.  In the worlds of Dr. Debra Birx, “I think it was hoped that the vaccine would work in that way.”  Government had no reason to believe the vaccines would work yet they rolled them out “hoping” that they would.

Billions of people were coerced in to accepting a treatment that had only hope and wishful thinking supporting it.  Not surprisingly the vaccines did not work.  No country with aggressive vaccination programs saw COVID cases decline; quite the opposite in fact.  COVID cases exploded to previously unseen levels in all of these countries; something documented in the animal trials.

Also consistent with the animal trials vaccine injuries have been rampant.  No vaccine in history has produced as many deaths and injuries as the COVID vaccines.  Almost weekly the news about the vaccines gets worse.  A comprehensive list of Vaccine problems can be seen on Sharyl Attkisson’s website.  A quick perusal of that list shows that by June of 2021 serious vaccine problems were being documented.  The programs should have been halted at this point but they were not.

Apparently hope is stronger than logic and reality.  We continue to jab adults even though we know that the vaccines will not stop the pandemic and many vaccinated people will succumb to injuries including death.  What we have done to date is insane but not as insane as what we are about to do.  We are about to jab toddlers with a treatment that has been a complete failure in adults.

After the complete, and completely predictable, vaccine failure in adults a child trail should not even have been allowed.  A completely unnecessary and immoral trial was done anyway.  The trail failed to show any efficacy yet the Jabs were still approved for emergency use.  Once again we are pursuing a policy of wishful thinking.  There is no way this does not end tragically.  Stupidity doesn’t just burn, it kills.

Diagnostic Pathologist Dr @ClareCraigPath reviews the Pfizer Trials for the under 5s:

"There’s NOTHING in this document that is in any way..positive about the vaccine, and it’s all there in black & white…I couldn’t have asked for MORE DAMNING EVIDENCE"pic.twitter.com/JECgkYUde3 https://t.co/0KGOdTkBQ2

It is an abject failure of the Regulators

HART sincerely hopes other credible doctors and scientists will join the chorus of disbelief.

“How a society treats its most vulnerable is always the measure of its humanity.” 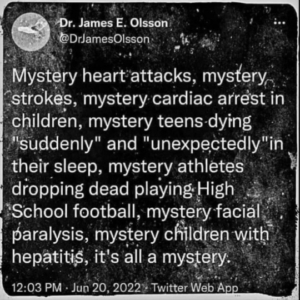