I came across this paper a few days ago.  Once again Researchers have found the SARs CoV-2 virus to be airborne.

This is from their conclusions.

Fine aerosols produced by talking and singing contain more SARS-CoV-2 copies than coarse aerosols and may play a significant role in SARS-CoV-2 transmission.

To this I say NO SHIT SHERLOCK.  It has been blindingly obvious from the start of this farce that the main transmission method could be nothing other than fine aerosols.  The sheer number of infections and how rapidly it spread should have told us that.

Contact tracers were often unable to find a direct contact to explain many infections.  Most respiratory viruses are airborne.  The lack of direct contacts is consistent with airborne transmission.  That should have been the conclusion.  Instead we blamed asymptomatic transmission.

There is a principal called Occam’s razor.  I have discussed it before.  Here is the definition from the Meriam Webster online dictionary.

To paraphrase; we should believe simple answers over complex answers.  The simple answer was always that the virus was airborne.  It explains how the virus spread so quickly and why none of the mitigation measures worked.  Masks, social distancing and surface sanitizing will have zero effect on an airborne virus.  That is exactly what we saw.  Lockdowns could only work if they were complete.  No one could leave their home for any reason for a period long enough to kill us all from starvation or thirst.  There is not a single piece of data contradicting a conclusion of airborne transmission.

The problems with asymptomatic transfer do not stop there.  Even that weasel Fauci admitted asymptomatic transfer has never been a significant factor in any previous outbreak.  So to believe that it was significant this time we must believe this virus is very different than any other virus that came before it.  That could be true but then we also must believe in something that is complete irrational.

Asymptomatic people have very low viral loads.  That is why they are asymptomatic; they are infected but not sick.  This is confirmed by the PCR tests.  It takes a much higher cycle threshold to identify and asymptomatic case.  This poses 2 very problematic questions for those who tout asymptomatic transfer.

To believe in asymptomatic transfer we don’t just need to believe that this virus is very different from all others.  We also need to suspend logic and reason.  I will agree that this virus is very different than most.  After all most viruses are not manmade.  But I will not accept an explanation that forces me to suspend logic and reason.  Especially when there is a simple explanation that is consistent with ALL OF THE AVAILABLE DATA.  THIS VIRUS IS AIRBORNE.

I have posted about this before so you might be wondering why I keep coming back to it.  I believe that the fallacy of asymptomatic transfer is centrally important to what is going on.  Countries are still threatening to go back to masks, lockdowns, and business closures.  If we had made the logical conclusion we would have abandoned those policies over a year ago.  We have spent and continue to spend billions on mitigation measures that do not work.  Measures that are highly detrimental to human health and the economy.

Had we made the logical conclusion that the virus is airborne we would have realized the only impactful measure would have been better building ventilation.  Draw in fresh air from outside and discharge contaminated air outside where sunlight will destroy the virus.  The more times a day you completely turn over building air the better.  The government could have offered grants to upgrade ventilation in public buildings.  This would have been expensive but it would have worked.  It also would have created rather than destroyed jobs.  The improved ventilation would have been beneficial during every subsequent influenzas season.

This is a no brainer so why did we not do this?  I mean, besides the obvious answer that brains are not common in government.  The government could have enacted a single program that decreased viral transmission and increased employment.  Instead, government chose an explanation and multiple mitigation measures that led to;

To answer this we should turn again to Occam’s razor.  The simple answer is that our governments wanted all of this.  They wanted to make us sick, strip us of our rights, and destroy wealth. 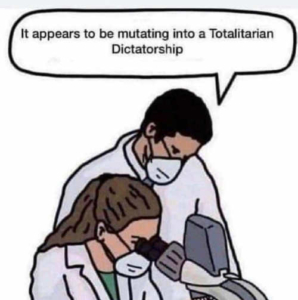 Subscribeto RSS Feed
OMG you Must Watch This VideoDr. Dan Stock, Another Doctor Who Obviously Reads my Blog.
Scroll to top