The Freedom convoy has got some politicians running and hiding like our feckless Prime Minister who has been moved to an undisclosed safe location.  Other Politicians have seized on the convoy as an opportunity to preen in front of the cameras.  Here is Pierre Poilievre.

Conservative Pierre Poilievre on the disparaging remarks the media has made about the Freedom Trucker Convoy.

“That doesn’t mean we disparage the thousands of hard-working, law-abiding and peaceful truckers, who quite frankly have kept all of you alive”pic.twitter.com/AISlCB3SJu

Pierre Poilievre effectively pushed back on a dishonest CBC reporter trying to discredit the protesters but Pierre I need to tell you it is too little too late.

I used to think favorably about Pierre.  He was the most effective federal opposition politician.  Every day he stood up in parliament and exposed the hypocrisy and incompetence of the Trudeau Liberals.  Then along came COVID and nothing changed.  It was business as usual.  Poilievre continued to lament the sorry state of Canada’s finances without ever once mentioning that the obvious solution was to drop COVID restrictions.

Poilievre like every other politician in Canada continued to push the fiction that eliminating individual rights was absolutely necessary, it just could have been managed better.  All he was promising was a more efficient form of Tyranny.  Even in this video Poilievre defends the trucker’s right to protest but he is still careful not to take a stand.  He did not say, and as far as I know has never said, that the COVID restrictions are wrong.

There is no doubt Poilievre is a skillful politician he is able to appear to support something without actually supporting it, just in case the winds change.  Canada is full of skillful politicians.  They are a dime a dozen and we do not need a single one of them.  So Pierre thanks for your spirited defense of the right to protest but your time is up.  Resign and go away; professional politicians like you got us in to this mess.  We can clean it up without you.

Pierre has been a big disappointment to me.  I had hoped he would be better but he is not the worst offender latching on to the freedom convoy to steal a little valor.  The worst offender has to be Saskatchewan Premier Scott Moe.  Yesterday Scott Moe release this letter calling on the Federal government to drop the vaccine mandate for cross border truckers. 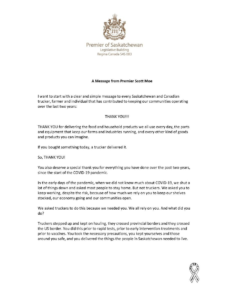 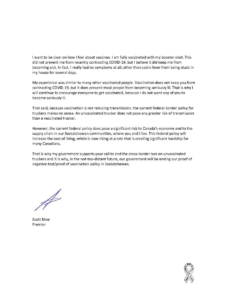 On the surface this is a great development but it is really just Scott Moe deflecting blame.  Scott Moe wants Trudeau to drop his federal Vaccine mandate while Saskatchewan still uses vaccine passports.  In his letter Scott Moe admits that the vaccines do not reduce transmission.  This he says is the reason for dropping the cross border trucking mandate.  Well Scott it is also a reason for you to drop your vaccine passports and you just admitted it in writing.

In the press conference Scott Moe did state that the vaccine passports would be phased out in the not too distant future.  That is not very definite, what does that mean?  Two weeks to flatten the curve is now approaching 2 years, is 2 years the not too distant future?  Why wait?  Scott Moe just admitted that there is no rational behind the Vaccine passports but he won’t get rid of them yet.  He wants to wait and see what happens.  If the Freedom Convoy loses steam and people go home, Saskatchewan will still have vaccine passports and worse for the foreseeable future.  Scott Moe is the same as every other Canadian Premier. He is a complete waste of flesh with no redeeming qualities as a human being.  Our country would be better off without him. 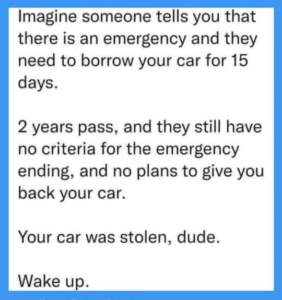