This is where we are today.  Thanks to the control group of unvaccinated we know the COVID vaccines have failed.  Government and media keep reporting that new hospital admissions are unvaccinated.  They are lying.  Every time the real data is released we find that Vaccinated people are over represented in new hospital admissions.  The COVID vaccinations have made things worse.

Instead of calling a halt to this grotesque experiment, government is trying to cover up the failure.  They are trying to eliminate the control group with Vaccine mandates and coercion.  If the control group can be eliminated their guilt cannot be proven.  Right now governments are behaving like mob bosses.  Eliminating witnesses before the trial can start.

Governments are moving swiftly to cover their tracks.  Boris, Justin, Joe, and Emmanuel are too stupid to orchestrate this but the people who are really in charge are not.  I am sure eliminating the control group was part of the plan from the start.  Why am I so sure?  Because the failure of the vaccines was highly predictable.

There are 3 glaring problems with the COVID vaccines that all but ensured failure.  There is no way the people pulling the strings were not aware of these problems and the likely outcome.  They had to prepare for failure because failure was all but guaranteed.  Those 3 fatal problems are.

This is why the drug companies were talking about booster shots before anyone even had their first shot.  The entire world will need boosters before the start of cold and flu season.  England is already preparing.

People took the shots thinking it was a onetime thing required to get freedom back.  If they knew they were signing up for a shot every year they would not have been so eager.

I discussed this in a post yesterday.  All previous coronavirus vaccine attempts failed due to ADE.  There was no reason to believe that ADE would not be a problem this time.  In earlier versions of the vaccines the initial results were good.  It was later when the test animals were exposed to a different coronavirus when the trouble started.

That sounds very familiar now doesn’t it?  For the first 6 months the vaccines looked great.  If you survived the side effects you were effectively protected.  Now treatment benefits are starting to wane.  As a result infections are now more common among vaccinated people than unvaccinated.  Infections are also much higher now than they should be.  COVID was not a problem last summer when no one was vaccinated.  This summer cases should be low and are not.  This is blamed on variants but it is really the vaccines.

Many researchers were warning of this.  Doctors have known for decades that treatments with less than 100% effectiveness can lead to variants.  When antibiotics were first developed for bacterial infections they were widely used.  It was not long before we realized that bacteria mutated to become anti-biotic resistant.  Super bugs exist because we made them.

The COVID Vaccines do not prevent infection.  People still get infected and produce variants.  Variants that can be unaffected by the Vaccine.

The Vaccines provide only temporary protection.  The price of that protection is that without yearly boosters you will be more susceptible to variants.  This vicious circle is completed because the more boosters we take the more variants we will create.  If you chose to be vaccinated I have bad news for you.  You have stepped on to a treadmill that you can never you can’t get off.

People who chose to be vaccinated were lied to and now they find themselves in a worse position.  I don’t feel sorry for all of them.  Just the ones under 40.  The people who lied worked for government and media.  If you are older than 40 and you still trust government and media you do not deserve my sympathy. 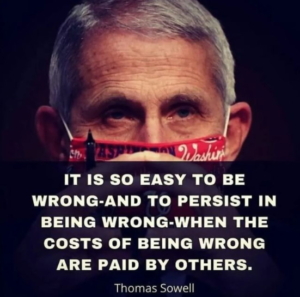