Once again I responded to the email explaining bluntly that I will never vote for Travis.  Since I am certain that no one reads my responses I thought I would print my latest Response to Travis Toews here as an open letter.  The campaign email and my response follows but first I think I should give some background information for readers unfamiliar with Canadian and Alberta politics.

This unusual, by Canadian standards, concentration of independent thinkers made things very difficult for Jason Kenney.  Jason Kenney is a communist poorly disguised as a libertarian.  Kenney knows how to say all the right words even though he understands none of them.  Still just saying the right words was enough and Albertans gave him an overwhelming majority in the last election.  The honeymoon ended abruptly with COVID.

When COVID hit Kenney was forced to choose between his fake libertarian persona and his real identity as a card carrying WEF globalist.  Kenney chose to follow the instructions and use the fake emergency of COVID to condition Albertans to accept their rights are secondary to “public safety”.  Why wouldn’t he?  Every premier in Canada did the same thing with great success.  The more tyranny they imposed the higher their approval ratings went.  They all had an advantage over Jason Kenney though, they were not premier in Alberta.

Jason Kenney watched in amazement as the exact opposite happened in Alberta.  With every escalation in COVID tyranny his popularity dropped.  Albertans, in contrast to most other Canadians, do not appreciate being abused by government.

So that brings us to today.  Jason is on his way out and his number one man, Travis Toews, the finance minister wants to pick up where Jason left off.  Jason’s former cabinet are stubbornly stupid.  For some bizarre reason they think cooperating with 2 years of tyranny makes them a shoe in for the top position in a province where the people just threw out the last little tyrant.  This is the latest email I received from Travis Toews’s team.

And here is my response

If you think this argument will work on me then you are seriously overestimating how much I value the opinion of the current UCP Caucus.  This is the same group of people who supported Jason Kenney when he decided eliminating individual rights and increasing unemployment somehow combined to form a potent ant-viral.  The support did not waver even when he forced an 80 micron cloth filter on the faces of children to somehow stop them from inhaling a 0.1 micron airborne virus.

In spite of the obvious damage to the economy and mental health you allowed this unscientific nonsense to continue for 2 years.  Not a single member of the current UCP caucus has a lick of common sense.  In fact I think the entire lot may be functionally brain dead; they must be if they think I will believe that Travis Toews balanced the budget.  Travis Toews did not balance the budget, $100 oil balanced the budget.  A child can balance Alberta’s budget when oil is $100/bbl.

I am sick to death of living under the moronic edicts of the current UCP caucus.  I will not vote for Travis Toews nor would I vote for any of the current caucus for anything.  As far as I’m concerned this is the least capable group west of the Trudeau cabinet.

If someone from the UCP stumbles across my blog, please give my message to Travis and whoever is pulling Travis’s strings.  Albertans do not want Jason Kenney or anyone who supported his damaging 2 years of utter stupidity. 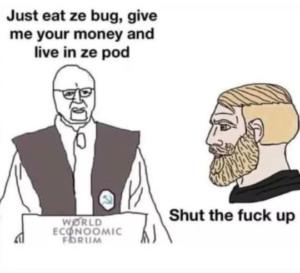 Subscribeto RSS Feed
When Parasites grow UncheckedWhy did we choose such a complex “Solution”?
Scroll to top