Canadian governing politicians are running scared.  The government of Nova Scotia has made it illegal to stand beside a highway and cheer for truckers.

The Convoy coming from the east left Nova Scotia days ago.  The government is obviously worried that this protest will build and more truckers will make their way to Ottawa.  The official narrative is that the Trucker protest is a fringe movement so the last thing they want to do is have pictures and video of crowds cheering them on.

This “fringe” movement has governments scrambling to control the narrative.  I have heard from people in the protest that the Ontario provincial police are harassing protesters as they cross the border and Doug Ford has turned of traffic webcams to keep people in the dark. 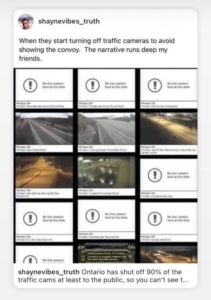 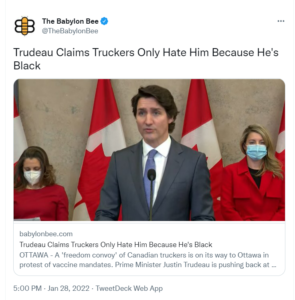 It really does appear that Canadian Politicians are afraid.  This is the most promising development in my lifetime.  Canadians are very docile people.  Two generations of public school indoctrination has turned us in to cattle.  I have watched in dismay my whole life as our government grew and our liberties shrank.  I know a few people who were similarly dismayed but the vast majority could not see a problem until now.  The government has finally overstepped and we just might resuscitate freedom in Canada.

It is not surprising that we find ourselves here today.  Our public schools have done a very good job at indoctrinating Canadians while Klaus Schwab played puppet master.  This video is from Alex Jones.  I know Alex Jones can be off putting to some but you don’t need to listen to him.  Start the video at the 5:10 mark and listen to Klaus Schwab himself boast the Justin Trudeau and more than half his cabinet are Schwab acolytes.

The erosion of freedom in Canada has been going on for a long time.  The first Trudeau communist (Pierre) started the ball rolling by passing a charter of rights that defined rights as privileges that the government can remove at their discretion.  Now Canadians have foolishly allowed the second Trudeau communist (Justin) to hold the reins of power and stock the highest positions in our government with people who believe that you should own nothing.

Canadian truckers are fighting to turn the clocks back and restore our rights and freedoms.  If they are successful I have only one thing to ask of Canadians.  This time don’t give your rights away for hollow government promises.  Don’t give them away for anything.