The Canadian legacy media has done their level best to ignore the truckers’ protest but the protest has grown too large and garnered too much international attention to ignore it any longer.  First Laura Ingraham interviewed Theo Flurry and now Tucker Carlson has interviewed one of the organizers.

Thousands of truckers in Canada have formed a convoy to protest the country's vaccine mandates. pic.twitter.com/vFmr9GrDyC

Ignoring the protest has not worked so the legacy media has been forced to change gears.  The tactic now is to discredit and marginalize them.  The CBC jumped to the task this morning.

The CBC finds it somehow sinister that people are donating to the truck convoy under aliases.  They can find no legitimate reason for doing so.  The CBC is the largest news organization in Canada and they receive 1.5 billion dollars in taxpayer funding every year despite the fact that very few Canadians watch the CBC.

You would think with their gigantic staff and budget the CBC could find at least one reason for donors to be using aliases.  Could it simply be that donors were worried a government funded entity, like the CBC, would comb through the donor lists looking to dox donors?  A police state like Canada does not just use the police.  Sometimes the government sends the CBC in to do their dirty work.

The CBC was also perplexed by the number of times Justin Trudeau and Theresa Tam seem to have donated to the truck convoy.  1.5 Billion Per year and their army of “investigative journalists” can’t even find Irony when they stare it in the face.

The worst thing in the CBC’s eyes however was that many of the donations came from outside the country.  They think this is iron clad proof that the protest is artificial and therefore not legitimate.  Congratulations to the CBC, this fund has only been around for 4 days and they have gotten to the bottom of a great scandal.  International donors are corrupting Canadian politics by helping to raise a fund equivalent to $100 for every truck in the protest.  The CBC is very concerned about $100 of foreign financing, after all everyone knows that money is way more powerful when it comes from foreign donors.  How else can you explain how $100,000 in Russian financed Facebook adds Trumped (pun intended) the $1,200,000,000 Hillary Clinton spent on her campaign.

I don’t think I will hold my breath waiting for the CBC to investigate the obvious corruption swirling around the green movement or the Trudeau family.  The CBC has way more interest in the $10 a Saskatchewan farmer may have donated to the truck convoy that the $10,000,000 a foreign government lobbyist may have donated to the Trudeau foundation.  I will however save some of my tax money by saving the CBC some time.  To the army of CBC reporters assigned to comb through the freedom convoy go fund me page, please listen carefully.  Yes that is my name on the list, I am a Canadian citizen and I did donate that money.  I had intended it to be a one-time donation but now that I know you are watching I have an overwhelming urge to donate again. 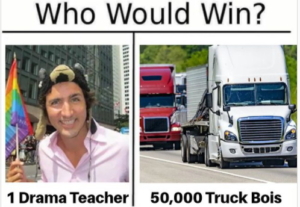