From the very beginning of COVID there was a distinct right/left split.  The further left the politician the more ridiculous the regulations were.  Science was never a significant factor it was, and is still, all about politics.  Right wing politicians are just not as anxious to weaponized cold and flu season as left wing politicians are.  Some of them even get uncomfortable killing thousands of people with useless mandates.

Initially the left wing politicians ruled.  The fear they induced through the media kept people under control.  Fear is the most powerful tool in politicians’ tool boxes but there is one downside to fear; it is exhausting.  Voters are finally exhausted and are turning to politicians less interested in destroying society and the economy.

The province of Alberta just swore in Daniel Smith while Italy elected Giorgia Meloni.  Both women have dropped vaccine mandates for government workers and have invited people persecuted under these illegal mandates to return to work.

Smith and Meloni are further right than other politicians in their jurisdictions.  That does not make them hard right or even right for that matter; it just makes them less insane than the alternatives.  It is odd that we live in a time where politicians who don’t want to persecute their own citizens are considered hard right.  Thankfully, voters are starting to turn to less left options.  Where this has happened COVID vaccines are no longer pushed.  Where it has not happened like the European parliament or Canadian federal government, vaccines are still all the rage.

The hard left is playing a dangerous political game.  Their push for total vaccine compliance will come back to haunt them.  The data on the vaccines is not good.  They don’t work and are not safe.  So far the hard left has been able to hide the truth because not everyone who takes the vaccine gets injured.  They always have useful idiots who will swear the jabs are safe because they took it without problems.

Any safety professional will tell you that just because you got away with something does not mean it was safe.  It might mean you were just lucky.  In this short video Dr. Ryan Cole explains how incredibly lucky most people were.  Poor quality control is what has saved most people from injury.  If Moderna and Pfizer ever improve their quality control we will have a vaccine apocalypse on our hands.  The incompetence of Left wing politicians has put us in a very precarious position.  It is only the incompetence of big Pharma that has kept us safe until now. 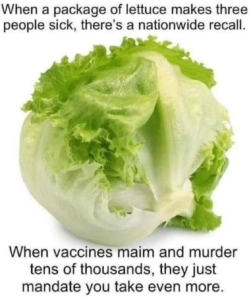 Subscribeto RSS Feed
The Dumb ages encapsulated in one PhotoThe Soy Boys are being pushed aside by Strong Women, and not a moment too s...
Scroll to top