We are living in what I am certain will become known as the dumb ages.  An age where logic and reason were eschewed for ignorance and empty virtue signaling.

100 years from now when historians try to explain why Canada so completely succumbed to the dumb ages every one of them will use this picture. This is a picture of Justin Trudeau’s cabinet ministers.  The brain trust of Canada so to speak.  The evidence is clear; Justin Trudeau is a moron who should not be running a country.  Dimwitted leaders have only one avenue to success.  They can surround themselves with smarter people, as George Bush did.  Justin did not do that.  Instead he chose this group.

Not a single person in Justin’s cabinet was chosen for competence.  Every one either ticked a diversity box or was so stupid Justin would not look out of place in their company.  The stupidity in Canada starts from the top and it shows.  Canada cannot solve problems and has ceded control to a foreign adversary.

According to the Trudeau liberals every domestic problem is solved by doing more of what caused the problem in the first place.  Inflation from budget deficits and printing money is tackled with more deficits and more money.  High taxes causing high fuel costs are fixed by increasing carbon taxes on fuel.  Vaccines that don’t work and injure people are easily solved by forcing more people to take them.

International problems are even easy for this group of simpletons.  All they to do is deny a solution exists.  This was the tactic Justin used to address global energy shortage.  Justin told Germany there was no business case for Canada to increase energy supply during a global energy supply crisis.  Justin used his non-existent business experience to immediately determine 80 million German customers willing to sign long term contracts is a poor business model.

I suppose all of this really is moot.  Under this unimpressive group, Canadians don’t really control Canada anyway.  That responsibility falls to Communist China.  Communist china can now do anything they want within Canada’s borders.  They train their military and pilots on Canadian soil using Canadian resources and even open police stations.  Canadians could try to stop this Chinese incursion but it is more difficult than you think because China also controls who gets elected in Canada.

Justin and his cabinet of Keystone cops are unconcerned by the damage they have done because it does not affect them.  High taxes and prices don’t affect them because they can vote themselves raises and taxpayer pay their expenses.  COVID vaccines are also not a problem since they are the ones who issue vaccine certificates.  The things that impact average Canadians just do not affect Justin or the diversity bunch.  With communist china counting the votes Justin did not have a care in the world until now.

The rampant stupidity and arrogance of the Trudeau liberals is giving rise to anger everywhere in Canada.  It is no longer safe for Justin’s Cabinet to travel around Canada without security and we don’t have enough security to cover all of them.  The RCMP are desperately trying to recruit more officers for security details with no success.  They simply can’t find Canadians who think protecting this disgusting bunch is a good idea or career choice.

The Dumb ages was initiated and is perpetuated by woke left wing politicians.  Canada is infested with woke left wing politicians.  Canadian politicians were woke long before the term was even coined.  The rot in Canada is old and well established.  This will make our climb out of the dumb ages very difficult.  There are times when I think it might even be impossible but there is reason to hope.  The fact that our gun grabbing Prime Minister can’t hire enough men with guns to protect his merry band or morons is very encouraging indeed. 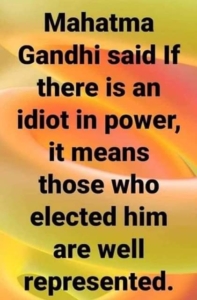