Daniel Smith has the media in full tizzy mode.  Since becoming Alberta Premier only a few days ago Smith has definitely been swimming against the COVID narrative current.  Smith has apologized to unvaccinated, denounced lockdowns, and called out health bureaucrats behind the destructive lockdown and vaccine policies.  All of this has Canadian media very upset.  No one hates the dissemination of truth more than the Canadian media.

Not only is Smith saying things the media does not like she is preparing to do things the media really does not like.  Dean Bennett of CTV news is very upset that Daniel Smith is going to cancel an agreement that Alberta Health Services (AHS) signed with the World Economic Forum (WEF).  The agreement was for Harvard and Mayo clinic researchers to share information with AHS.  On the surface this sounds like a good thing until you ask the obvious question.  Why is the WEF even involved in this?  What kind of information will be shared when it is funneled through an organization that openly advocates for population reduction?

Dean Bennet does not want you to consider the strange nature of this agreement.  Apparently the only possible way medical researchers will share data is if Klaus Schwab is allowed to edit it first.  This is just the natural order of things and we need not worry because Klaus Schwab is a benevolent billionaire who only has your best interests at heart.  According to Dean Bennet anyone who questions the saintly nature of Klaus Schaub is a crazy conspiracy theorist who has already been debunked.

That started online conspiracy accusations, unproven and debunked, that the forum is fronting a global cabal of string-pullers exploiting the pandemic to dismantle capitalism and introduce damaging socialist systems and social control measures.

I must have been sick the day that Dean Bennett debunked the video of Klaus Schwab bragging about being the defacto leader of Canada.  He gleefully discusses penetrating the Trudeau cabinet like a rapist penetrating their victim.  The victims of this rape are not just the Trudeau liberals but every Canadian and apparently Dean is OK with that.

The Canadian media is disgusting.  They accept direct cash payments and preferential tax treatment from the Trudeau Liberals.  In return all they must do is lie which they have absolutely no reservations about.  The last 2.5 years of destruction was no possible without the cooperation of the media.  They have as much blood on their hands as the government. 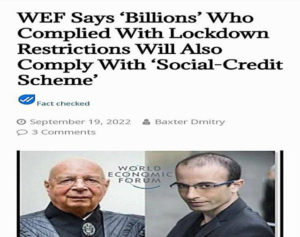