For decades I have watched western society slide slowly into stupidity.  It did not matter who we elected the slide continued.  Under some leaders we slid slower than under others but the direction never changed it was always to increasing stupidity.

To me everything was falling apart quickly but to the political class it was not happening fast enough.  Their solution was COVID.  There is nothing better at removing the last few IQ points than fear.  Our political class manufactured an emergency that greased the rails of our downward slide.

When the COVID restrictions started they were so incredibly stupid that I believed people would not fall for them.  I told everyone I could that what we were doing was wrong.  I explained my logic and showed them the science.  No one wanted to listen.  Everyone was too busy following the science to consider my arguments based on said science. 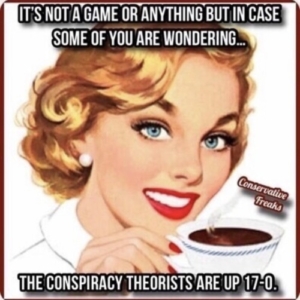 For months I looked for signs that people could be pulled back from the intellectual abyss.  Every time a new damning piece of evidence surfaced I thought this is it.  This will finally make people question this lunacy.  Every time I was wrong.  I watched in dismay as the media covered the last lie with an even more egregious and unbelievable lie.

I call the lies unbelievable because they were so ridiculous.  How can you spread a disease that you do not have?  How can a vaccine be better than natural immunity?  Why do you think a thin pierce of cloth can stop something as small as a virus?  Unfortunately what was unbelievable for me was all too believable for the frightened masses.

I began to believe that we would not recover from COVID, not the disease but the fear induced stupidity.  Through COVID I have had a pretty good track record.  I have been right far more than wrong and certainly far more often than any of the government’s “experts”.  You don’t need to take my word for that; I have 2 years’ worth of articles on this site and I will stand behind everything I have written.  Despite my pride in my track record I am quite happy that today I might actually be wrong.  COVID may not have killed sanity and logic; the recovery just took way longer than I expected.

I saw 2 things this morning that give me hope.  The first is this press conference from our new premier Daniel Smith.

Just yesterday a cautioned that Premier Smith might not understand the size of the threat posed by the left wing bureaucracy controlling Alberta Health Services (AHS).  On paper AHS is supposed to manage the health care system for the benefit of Albertans.  In practice AHS has allowed the system to deteriorate while they were out negotiating partnerships with the World Economic Forum (WEF).  What possible reason could AHS have to sign a partnership with the WEF?  The WEF does not provide medical supplies or services.  The WEF only supplies rebranded communist philosophy blended with Malthusian alarmism.  This press conference assures me that Premier Smith does understand the size of the threat and might even do something about it.  As an added bonus Smith even called out the previous Premier, Jason Kenney, for his part in this fiasco.

The next thing that gives me hope is the latest out of Sweden.  The new Prime Minister has declared that Sweden will not meet its 2030 greenhouse gas commitments.  Even more encouraging than his simple acknowledgement of reality is the composition of his new cabinet.  He does not have a climate minister.  Is this the first step?  Will western society let go of the hubris that made us believe governments could control climate?

The level of stupidity associated with COVID is only rivalled by the level of stupidity surrounding climate change.  The Stone Age did not end because we ran out of stones.  Every technology eventually gets displaced when we develop a better alternative.  There is no great global conspiracy preventing better technology from replacing fossil fuels.  If we had something better we would already be using it.  When environmentalists claim that we can simply replace fossil fuels they are being either stupid, dishonest, or both.

Fossil fuels are used because we don’t have anything better.  They have a high energy density and can be easily transported to where ever they are needed.  The battery on a Tesla weighs 560 kg (1234 lbs.) and takes hours to change fully.  That battery contains roughly the same energy as 30 liters or 8 gallons of gas which can be put in your tank in seconds.  Gasoline engines have some obvious advantages over electric vehicles.  We use gas vehicles because of those advantages; it is not a conspiracy among car manufacturers.

That is not to say that EVs don’t have a niche.  Electric vehicles are better at stop and go driving which makes them good for commuting.  The added bonus is the pollution is moved out of the city to the electrical generating station.  There are reasons to choose an EV but saving the planet is not one of them.

Trying to force fit EVs for tasks better handled by gasoline engines makes things worse not better.  Even if we were so stupid we couldn’t do it anyway.  With the current state of battery technology we simply can’t mine enough cobalt and lithium to build all the batteries we would need.  Once again the left proposes an impossible solution to an imaginary problem. 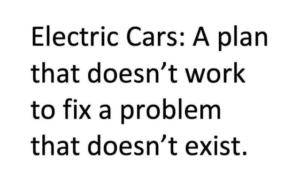 That is the fundamental problem with the left that we may finally be waking up to.  Conservatives acknowledge that there are some things we just cannot change.  We live in reality.  Progressives believe they can bend anything to their will.  They refuse to acknowledge reality.

We endured 2 years of lockdowns because the left was would not believe that lockdowns did not work no matter how many times they failed.  Conservatives understood lockdowns could not work.  We were dealing with an airborne virus with animal hosts.  It does not matter how often or how hard you lockdown at best you just postpone the inevitable.  The virus will not go away and hiding from it was childish.  The reality is that elderly people will die in cold and flu season.  The only thing we can do about it is provide the best possible medical care.

The same denial of reality also applies to climate change.  Theoretically the average temperature can be reduced by curtailing CO2 emissions.  It is uncertain if this will be beneficial or harmful.  What is certain is that lower crop yields and energy scarcity will be very harmful.  Fossil fuels have saved far more lives than have ever been lost to hot weather.  If you don’t believe that imagine a world where hospitals have no power, homes have no heat, emergency vehicles and farm equipment have no diesel.  How many people would die?

A realist understands there are tradeoffs.  Ending fossil fuels and applying lockdowns come with unacceptable costs and provide little to no benefit.  Progressives only look at one side of that equation.  They believe a change with only minimal benefits is still necessary because in their imaginary world everything they want comes at no cost.

The world is a very big place but this morning I am filled with hope by only 2 politicians who have decided to acknowledge reality.  Humanity might just survive after all. 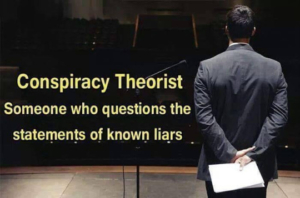