The European Parliament just held hearings where Pfizer admitted the vaccine was never tested to ensure that it would prevent transmission.  There is good reason why Pfizer did not investigate the effect on transmission.  It is impossible for these treatments to prevent infection or transmission and Pfizer damn well knows that.  There is no reason for Pfizer to prove their expensive treatments do not work.  All Pfizer needed to do was present the bare minimum of testing, then sit back and watch as governments over sold their products for them.

So the cat is out of the transparent bag.  The Jabs cannot do things that they were never designed to do.  That is not the only cat that should be visible now.  It should be clear to anyone able to think that none of this was every about the SARs COV-2 virus in the first place.  If this was about a virus then the EU vaccination policies would have changed once it was revealed the vaccines are not an effective public health tool.  This most definitely did not happened.  The EU has not changed their vaccination policy one bit.

Nearly 3 years in to the scamdemic why is it important to make unvaccinated take the “primary series”?  The first 2 jabs were designed for a virus strain that is no longer circulating and did not work even when it was circulating.  An even better question is why the push to give booster shots to pregnant women when there is a mountain of evidence the primary series harmed pregnant and nursing mothers?

For 2 years on this blog I have maintained this was never about a virus or public health.  If it was lockdowns, masks, and forced medical treatments would never have happened.  COVID was always a weapon used to strip liberty and transfer wealth.  That is exactly why governments are forging ahead; COVID might be over but the government’s desire to subjugate and steal will never end.

COVID policies have been the most effective weapon governments have ever used.  Not only did they accomplish their primary objective of wealth and liberty confiscation they also had important secondary benefits.  Reserving power and wealth for a self-appointed elite is much easier when you can identify citizens who might be problematic.

Masks and vaccine passports were a great way to identify and isolate anyone inclined to think for themselves but that was not their only use.  Our political “elite” also used them to purge the bureaucracy and medical establishment of anyone who could not be counted on to support the government.  In Canada doctors who put the health of their patients over government policy were suspended and slandered by the government controlled media.  In the US, FDA doctors who would not agree to boosters without testing resigned.  How much “encouragement” to resign do you think was applied?

Governments are purging the bureaucracy and public life of all the sheep dogs.  Soon all that will be left are sheep and the wolves in government.  That is when things get really bad really fast. 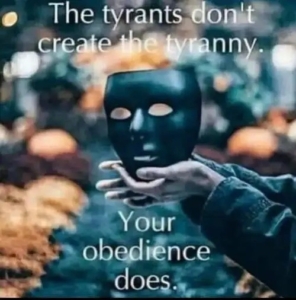 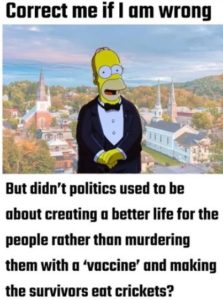