It really has been remarkable how many high profile people who have either succumbed to rare illnesses or died suddenly in 2022.  Even more remarkable is how everyone is ignoring it even as it continues to happen.  In the last 2 days a 37 year old television producer, Dax Tejera, and a 45 year old UFC legend, Stephen Bonnar, both died suddenly of heart failure.

The whole world is in denial about the COVID vaccines.  I get it; I really do.  When it comes to vaccine deniers, the ones that deny the existence of serious side effects, there are two camps.  In one camp you have evil bastards like Justin Trudeau who are making money off the vaccines.  Camp two are all the people who were fooled in to taking the jabs. Both groups have their own reason to deny the obvious.

The people in Camp one will never admit the existence of vaccine injuries because there is too much money at stake and they value no life other than their own.  It does not matter how many people die; there is nothing that will force Justin Trudeau to care about anyone other than Justin Trudeau.  Camp two are in denial because admitting the truth makes them very uncomfortable.  No one wants to admit that they were fooled and it put the lives of their family at risk.  What parent, after their child dies or gets injured, wants to admit that it was their fault?

At some point camp two needs to get past their embarrassment and speak up because this cannot be allowed to continue.  The data each week just gets worse and it is now painfully evident that it gets worse with each jab.  Below is the latest data from New South Wales.  There hospitals and morgues are full of double boosted people. 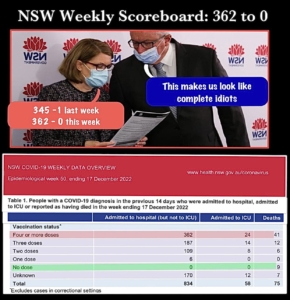 If boosters are supposed to increase the protection, why are the people who have taken boosters over represented in deaths and hospitalizations?  Keep in mind this is only COVID.  People hospitalized or dying from vaccine injuries are not included in these numbers although by now I think we need to admit that COVID is also a vaccine injury.

So how does this happen?  Don’t the Jabs stimulate your body to produce COVID antibodies?  Yes they do but the problem is that you get only a partial antibody response because the vaccines only use a piece of the virus rather than the whole virus.  But some should be better than none, right?  Well as it turns out the presence of antibodies is not nearly as crucial as the type antibodies.  A paper has been published that shows the Vaccine antibody Reponses.  There is a good discussion of the paper in this article.  It turns out that the jabs produce very little of the antibody IG3 and quite a lot of IG4.  This is a deadly combination.  IG3 is one of the most important antibodies for fighting COVID and you don’t get it.  IG4 on the other hand makes things much worse.

Why would your body produce antibodies that make things worse?  Well IG4 can save your life but just not from COVID.  IG4 antibodies are the ones that keep your body from overreacting to small persistent irritants.  Without them we all have severe allergic reactions to pollen and peanuts.  In effect your body learns that some things are not worth the trouble and should be ignored.

I could be way off base here but to a medical layman like me it appears that the jabs cause this because of the way they work.  Once you reprogram your cells to produce spike proteins they continue to produce spike proteins for an extended period of time.  Your body gets used to the spike proteins and produces the IG4 to keep the immune system from staying in overdrive all the time.  This is a real problem when you finally get infected with the real virus.  Your body has already been pre-programed for a lazy immune response.

If your immune system is being told to stand down and ignore virus, the virus can hang around a long time and do A LOT of damage and you’re not really going to notice.  You won’t get the inflammation and perhaps fever.  You’re walking around infected and contagious, but with no sense that you are.

This is why each booster makes it worse because your body is constantly swimming in spike proteins.  Your body just learns to live with them until it is too late to do anything about it.  These Jabs are a monumentally bad idea.  They damage the body in multiple ways while slowly eroding your ability to survive COVID.

The people in Camp two need to get past their embarrassment and speak up.  Being embarrassed is better than being dead. 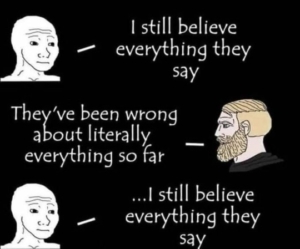