If the first lockdown worked why would we need a second one?

If the first lock down did not work why the hell would you do it again?

365 days ago, we were told we needed to lock down for 2 weeks to flatten the curve.  This was ridiculous statement from the evil dwarf on March 17th, 2020.  The statement was ridiculous because no virus has ever extinguished itself in 2 weeks.  The Sars COV2 virus will be with us for centuries to come.  You must be as stupid as Justin Trudeau to believe a 2-week lockdown would have made any difference.

52 weeks later lockdowns still have not worked so why do we still have them?  The innocent reason is that our Governments ae completely disconnected from reality.

I was reading the newspaper on the weekend, there was an article about e-scooters and e-bikes in Calgary.  Originally a company provided both.  They lost money on the bikes and made money on the scooters.  The next year there were more scooters and no bikes.  This did not sit well with the city of Calgary.

The city of Calgary loves bicycles.  They spend millions on bike lanes.  Relatively speaking very few people use bikes to commute in Calgary but the city spends millions on them anyway.  When it comes to bikes, no expense is too large.  City hall believes everyone should invest in Bikes.  They would not approve the scooters again unless the bikes were brought back.

This City was proud that they could force a company to cut into their profits.  They described it as a great example of progressive thinking by the city.  These people are delusional.  They do not understand that businesses that lose money cease to exist.  We have been locked down for 52 weeks to flatten the curve because the government does not understand that economies cannot exist without profits.

The people who constantly intrude on the economy with destructive regulations simply do not understand how an economy works.  We are still locked down because government is blissfully unaware of the damage they are doing to the economy.  Calgary’s mayor was quoted downplaying the impact of all the ridiculous restrictions we face.  He does not think we have a problem.

I went for breakfast this morning in downtown Calgary.  I chose a restaurant that 1 year ago would have been full every morning.  There were 2 staff and 3 customers this morning.  When we left the restaurant at 7:40 there were no cars on the road.  No one is in the downtown core.  If this continues Calgary will never recover.

Some Calgary politicians have already floated the idea of “repurposing” all the empty office towers as Condos.  Again, these people are clueless.  If the shops and restaurants close, and you telecommute to work, why would you live downtown?  Why would you even live in Calgary?  If current trends continue people who already own condos downtown will not be able to give them away.  How are you going to sell new ones?

The real world never seems to surface with politicians and bureaucrats.  They think people will rent bikes if they force a company to make them available.  They also think there will be a mad rush to by condos downtown right after the bureaucrats destroy the downtown.  What do you want to bet they think they can force a developer to build those condos?

People who are disconnected from reality are commonly called lunatics.  They might be well meaning but these politicians and bureaucrats are incompetent lunatics.  The innocent answer as to why we still have lockdowns is that the inmates are in charge of the asylum.  I will let Chris Sky give you the sinister answer.

There is a lot of money to be made with vaccines.  You decide. 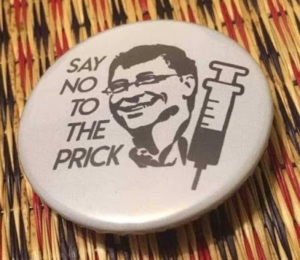