With every passing day more information is released that casts doubt on the need and effectiveness of lockdowns.  This was just released in Ireland. 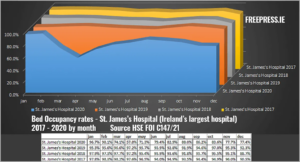 This is exactly what we saw in Alberta’s numbers.  The hospitals were emptied in April in anticipation of a wave that never came.  The rest of the year hospitals remained empty.  This was the primary lie about lockdowns.  We had to lockdown to prevent the hospitals from being overwhelmed.

The next lie about lockdowns was that they would prevent the spread of the virus.  Time and data are also exposing that lie.  Even worse for the architects of the lie, people are starting to notice.

From the very beginning of this farce the mainstream media have been ardent lockdown supporters.  The more ridiculous the restrictions the more lavish the praise for the Tyrant.  The media has been complicit in thousands of lockdown murders.

Things will get very uncomfortable for the media lockdown cheer leaders as more people realize what colossal mistakes lockdowns were.  That is probably why they are changing their language and trying to deflect blame.  The Zero hedge article quotes a reporter from Bloomberg that says this.

“[I]t was not crazy to rely on more-primitive measures. How successful those measures have been will remain a matter of much research and debate…. In the U.S. it’s much harder to know how many lives all the testing and quarantining and mask-wearing and lockdowns have saved.”

Did you get that?  Lockdowns worked it is just really hard to know how well they worked.  Nothing to see here folks, and even if there was, you cannot possibly understand it.

If everyone had locked down the reporter would be correct.  When everyone does the same thing it is hard to evaluate the effects of doing something different.  Thankfully not everyone did the same thing.  There were 2 places that did nothing at all, South Dakota and Belarus.

I have discussed South Dakota many times.  They did nothing other than ask people to not be stupid.  You simply can’t do that in a country that has elected Justin Trudeau twice.  South Dakota had the same numbers as North Dakota where they locked down.  That alone is enough to prove lockdowns do not work but Belarus is even more interesting.

Belarus is a small land locked country in central Europe.  10 million people live in a country about 1/3 the size of Alberta.  Belarus did absolutely nothing to try and prevent the spread of Covid.  In March their President, Alexander Lukashenko, had a formula for handling Covid.  He told people that the best thing they could do is play hockey, drink vodka, and use saunas.  Of course, he was ridiculed for this.  Now 1 year later how did all that hot drunken hockey work out?

The plot below compares covid cases per capita for Belarus and every country that it borders.  The countries are listed from west to east.  I put Canada in on the right for comparison. 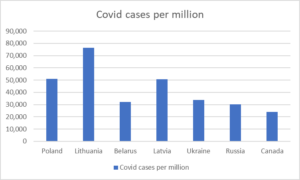 Belarus had one of the lowest infection rates in Europe.  They were lower than any neighbor except Russia.  That is very impressive, but case counts can be misleading.  Every country tests differently.  Also testing positive is not what is important.  How many people die is far more important.  Here is the same plot for deaths/capita. 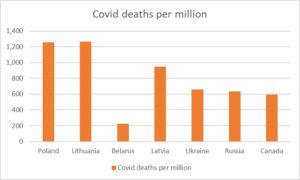 One of these things is not like the other.  Belarus did not prevent infections but then neither did the lockdowns.  What Belarus prevented was deaths.  They avoided excess deaths by avoiding lockdowns. 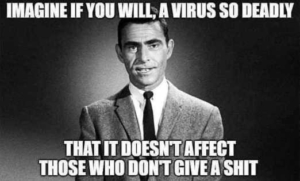 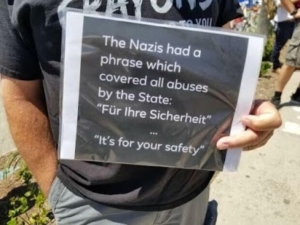