There are times my rants get away from me.  They take on a life of their own.  This is one of those times.  I apologize for the length and all the graphs.  Please stay with it.  I do get to the point eventually.

In my last post I showed that Canada has not had an excess death since June.  That same day Statscan published this report.

This report is interesting for 2 different reasons.  I want to start with the excess death numbers.  My numbers show 7,347 excess deaths, far below the official COVID count of 15,606.  The Statscan report show excess deaths to the week ending December 19th as 13,798 very close to the official covid total of 14,154.  So why the discrepancy?  To figure that out we need to get in to the sausage making. 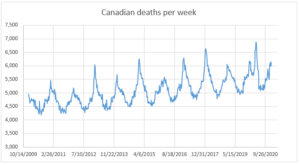 You can clearly see deaths go up in Canada every year.  That is because every year there are more of us so I adjust for population using data from Statscan. I turned the plot in to this. 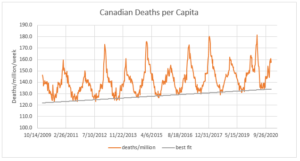 Even after adjusting for population yearly deaths are still rising.  That is because we are getting older.  Every year the percentage of Canadians over 80 increases.  So I need to adjust for this by flattening the curve to get this. 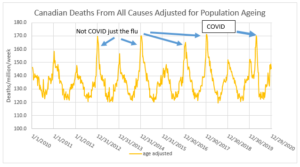 You can see the COVID peak in the spring of 2020.  It was equivalent to a bad flu year.  It will forever be a mystery how we survived those flu years without a lockdown, but I digress.  Now that I have adjusted the numbers I can use that to construct my average year and what I expect in 2020.  See below. 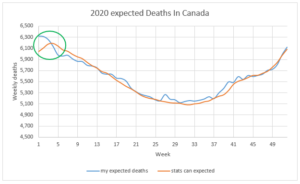 This is what Stats Can released on March 10th. 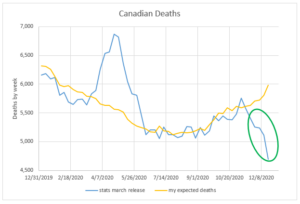 The data in the green oval is obviously wrong.  Stats can releases new numbers every month and the numbers are always 8 weeks behind.  Even though the numbers are 8 weeks behind, some provinces still don’t have complete numbers.  BC and Alberta are very good, Ontario and Quebec are awful.  So what Numbers are statscan and I using if even the March numbers are incomplete?

We are both adjusting the numbers up.  Again I don’t know how stats can is doing it but I do know how I do it.  Whenever I present the Canadian numbers on my blog I take the latest release and adjust them up.  My adjustments are based on how far out the last release was from the new release over the same weeks.  The bar chart below shows how many deaths I have added to each release. 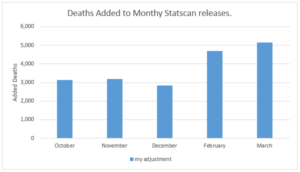 When I use this methodology for the latest release this is what I get. 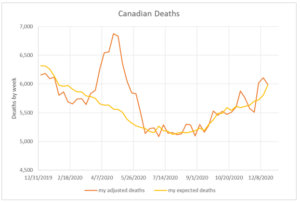 Deaths in the last half of 2020 ran right on average.  Statscan however applies an even larger adjustment to their own numbers. 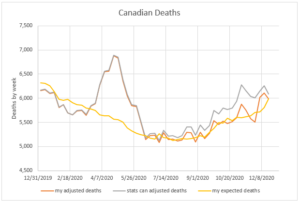 The top blue line is Statscan.  According to Statscan we have been seeing excess deaths for almost the entire period.  Statscan’s adjustments are suspect for 2 reasons.  First the magnitude is so large.  This is what their adjustment looks like compared to mine.  Remember mine is based on how far out the numbers have been historically. 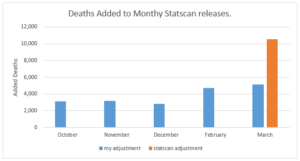 Statscan wants you to believe we have had 13,798 excess deaths based on data they have adjusted up by 10,515 deaths.  Their excess deaths are almost completely adjustments.

The other problem is the timing of the adjusted deaths.  Statscan’s adjusted deaths peaked the week of November 7th.  That is an odd time for deaths to peak in any year especially when you consider that COVID deaths rose steadily until January 25th.  See below. 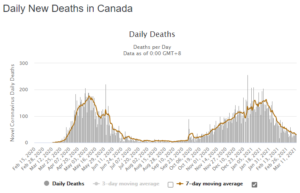 Statscan has made adjustments that are obviously wrong.  I am certain these numbers will be quietly adjusted down later this year.

So, Statscan lied to support the official COVID total of 14,154.  That makes the last half of the report very interesting.  Here is a quote from the last part of the report.

“However, more recently, the number of excess deaths has been higher than the number of deaths due to COVID-19, and these deaths are affecting younger populations, suggesting that other factors, including possible indirect impacts of the pandemic, are now at play.”

That is a very convoluted way to say the lockdowns are killing people.

Statscan will fudge the death numbers to match the covid totals because they know no one will notice when they finally release the real numbers, but this is a bridge too far.  Sooner or later people will notice young people without COVID are dying in large numbers.  Statscan has shown they are willing to carry water for the government.  They have also shown they will not carry it through the prison door.  The government will have to do that for themselves.

The main stream media immediately fixated on the 13,798 excess deaths as you can see in this report.

You can always count on the mainstream media to report fake numbers as long as they are scary.  Thankfully, it did not take long for media Trudeau does not control to notice the last half of the report.

The damn is starting to break.  More and more people are starting to notice lockdowns were a colossal mistake.  We did not save a single senior but we did kill thousands even millions of young people.

There is no scientific basis for a lockdown to prevent viral spread.  There was a lot of science indicating lockdowns would come with a horrible cost.  The data is showing that now.  Despite all this, lockdowns were very popular with politicians, bureaucrats, and Karens everywhere.  Of the 3, Karen was by far the most important.  Politicians could not have done this without Karen’s support.

Next time Karen is screaming about your mask and lecturing you about staying home, remember this.  Karen does not have the moral high ground, you do.  The government decided you need to forfeit your life for Karen’s protection.  Karen whole heartedly agreed.  Karen is evil.

The government is evil.  Jason, Justin, Deena, and Theresa, they are all evil.  Somehow everyone who caused this must be held to account.  That includes the Politicians, Bureaucrats, and Karens. 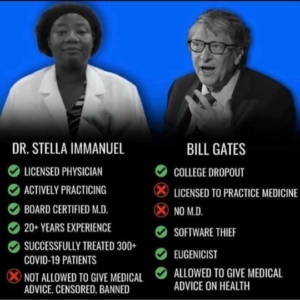 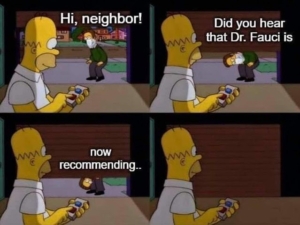 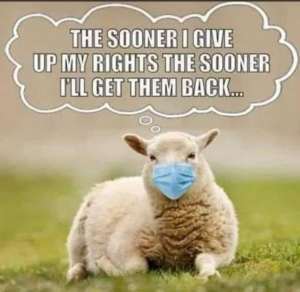 Subscribeto RSS Feed
Somehow, During The Great Plague of 2020 Canada had no Excess Deaths After ...2 Weeks to Flatten The Curve Certainly had Legs, Didn’t It?
Scroll to top