This is not about a virus.  I don’t know how many times I have said that in the last 18 months.  I must confess I did not start there.  At first I thought this was stupid people doing stupid things out of fear.  Prior to 2019 I believed governments were more stupid than evil.  There is no doubt that politics and governing attracts sociopaths but I thought the damage they caused was largely incidental rather than intentional.  I no longer believe that.

I found this rather long video a few days ago.  An ICU nurse speaks about her experience and data she has found.  There is nothing new here.  Everything she says I have discussed in this blog.  She does however, make one very thought provoking point.  During her ivermectin segment she states that with ivermectin government could end the pandemic, they just don’t want to.

She is absolutely correct governments are choosing to prolong the pandemic.  With vaccines they are actively working towards making it perpetual.  The end goal seems to be vaccine passports and the control that comes with them.  As Catherine Austin Fitts points out to control the modern world you need only 2 things.

Again this video is very lengthy but worth watching if you have the time.

Austin Fitts blames an unnamed shadowy group that has been pulling stings for decades.  This is a little out there and very conspiracy theory-ish.  Even so I think it would be wrong to dismiss this too quickly.  In a post COVID world yesterday’s conspiracy theory is today’s hard fact.  If you have trouble believing her ask yourself these 3 questions.

We are in the middle of a campaign to destroy our society.  At this point that is impossible to deny.  As Austin Fitts points out this started way before COVID.  COVID just might be the last weapon they need to complete the coup.

Recently there have been a number of non COVID events that demonstrate government willfully destroying society.  The Antifa and Black lives matter riots are clear examples.  It is easy to stop riots.  Throw rioters in prison.  They had no problem indefinitely imprisoning January 6th protesters.  Yet they arrested few BLM/Antifa arsonists and looters.  The ones they did were released immediately without bail.  Not only did Governments not stop the riots, they made sure the ringleaders were free to participate in other riots.

Western governments are also using multiculturalism to destroy our societies.  Prior to COVID multiculturalism was the most effective weapons governments wielded.  This is not about race it is about culture.  You can have a multi-racial society you just cannot have a multicultural society.  Culture is many things.  One of them is a common set of ideals and morals.  There is mutual agreement about what is right and what is wrong.

This is where the lefties always get it wrong.  Lefties firmly believe every culture has the same moral compass.  There is no evidence to substantiate this.  In western and far eastern societies violence is not acceptable.  These societies are very peaceful, orderly and prosperous.  In other societies violence is acceptable and these societies tend to be chaotic and lag economically.  Why on earth would you take someone from a violent culture, let them in to your country, and tell them to retain their culture?

Politicians are not just sitting ideally by and watching as this happens.  They are forcing it to happen.  Barrack Obama and Hillary Clinton lit a massive fire in the Middle East.  This generated a flood of migrants.  Western countries were coerced in to accepting millions of them.  Many from countries outside of the war zones.  The media called them refugees but they were not.

Historically Refugees are Women, Children, and old men.  Not many healthy military aged men are among them.  Those men are either dead or left behind to fight.  The migrants that Obama forced on Europe were almost entirely military age men.  We were supposed to believe that it was so dangerous that the men were forced to flee.  But it was not too dangerous to leave their families behind.  Why would you accept millions of cowards who abandoned their families?

The west is doing this again.  Joe Biden’s handlers just created Chaos in Afghanistan.  Right on que the media printed stories about how it is our obligation to accept 100s of thousands of Afghan refugees.  Below is a picture of one of the first planeloads. 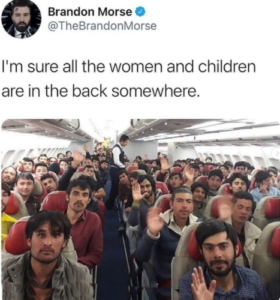 As Yogi Berra would say, “it is Deja Vu all over again”.  Do you see any women or children on that plane?  Afghan culture is disgusting by western standards.  Violence against women and sexual violence against young boys is common and accepted.  The Taliban used young boys as honey pots to trap Afghan military and police.  The Afghan men from the first Obama invasion are now raping women and boys all over Europe.  In some countries Afghan men account for more than half the rapes when they are only a small percentage of the population.  That is multiculturalism in action.  Why demand that these Afghan men conform to western ideas about the abhorrence of rape?

A better question is why let them in to your country in the first place.  Again the increasing sexual violence is easy to stop.  Do not let single military age men from countries that condone rape in to your country.  It would be easy to stop but Politicians don’t.  Obviously this is what they want.

We are being played.  There can be no doubt that someone, or some group, is orchestrating this.  Politicians are encouraging and facilitating domestic terrorism.  They use tax dollars to create chaos abroad.  The chaos is used to justify importing an army of young men from hostile nations and cultures.   COVID restrictions are used to destroy families, friendships, lives, and livelihoods.

When you take all recent events in to consideration it is apparent that COVID did not just happen.  It is part of a larger plan that has been playing out for years.  It is well past time to take our countries back from whoever it is that is pulling the strings. 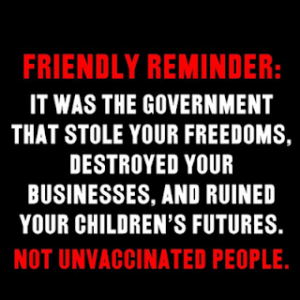 Subscribeto RSS Feed
COVID Vaccines are not the Solution, They are just another Dangerous Government...Mask Mandates have returned to BC and no one is Angry about it
Scroll to top