This speech might seem ordinary but by Canadian Standards it is nothing short of miraculous.  To understand just how remarkable this speech is you must be a Canadian over 50 years old.  The politician she mentions, Ralph Klein, was Alberta Premier from 1993 to 2006 and the last Canadian politician that respected taxpayers.

Even in 1993 Ralph Klein was a throwback.  Most Canadian politicians had abandoned the idea of public service decades before Ralph became premier.  Daniel Smith’s speech was the first time in 16 years that a Canadian politician acknowledged that politicians work for the taxpayers and not the other way around.  That alone puts her in a class by herself but she did not stop there.  She might be the only politician in the country who has even read our constitution.  She is certainly the only one to notice that our federal government violates the constitution on a daily basis.

The Canadian constitution is relatively new.  Pierre Elliot Trudeau (Justin’s Step father) signed our current constitution in 1982.  I don’t know why he bothered.  He never followed it once and no Prime Minister since has bothered to follow it either.

Social programs, Education, and natural resources, are the responsibility of Provincial governments.  Currently Justin Trudeau has 39 cabinet ministers; 17 of those 39 ministers are responsible for portfolios that are clearly provincial jurisdictions.  44% of our federal government is redundant and should not even exist under our current constitution.

For Canada to survive every level of government needs to have their wings clipped.  They need to understand we do not serve them; they serve us.  We also must reduce the number of government employees by more than 50%.  That should not be difficult at the federal level since 44% of those jobs are unconstitutional.  It is a shame that Canadians outside of Alberta don’t understand this. 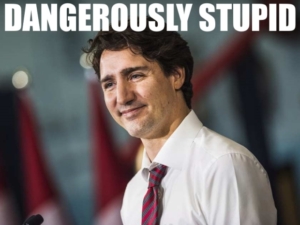