The COVID vaccines did not result in fewer COVID cases or deaths.  They did however result in far more heart attacks and strokes.  The plot below shows the impact the Jabs had on heart attacks in Australia. 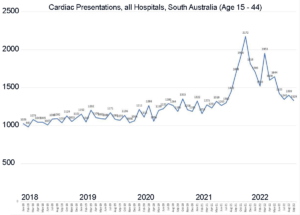 Governments have a real problem on their hands.  It is getting very difficult to ignore vaccine injuries.  Vaccine injuries are starting to be discussed on prime time television.  Tucker Carlson interviewed a woman last night who lost most of the vision in one eye due to vaccine induced blood clots.

When governments face a crisis caused by their own stupidity they tend to run the same playbook.  Step one is always lie and deflect blame.  But how do you lie about vaccines that cause blood clots?  Incredibly you blame the blood clots on people who did not take the vaccine.

I shit you not; the NIH just published a paper blaming blood clots on anti-vaxxers.  The liar/lunatic that wrote this paper has concluded blood clots are due to stress and the stress was caused by anti-vaxxers spreading misinformation about the vaccines.

This biological mechanism (the constriction of veins, arteries and vessels under mental stress) is the most likely cause for where there has been blood clots, strokes, heart attacks, dizziness, fainting, blurred vision, loss of smell and taste that may have been experienced shortly after vaccine administration. The extreme mental stress of the patient could most likely be attributed to the fear mongering and scare tactics used by various anti-vaccination groups.

To prove what a diligent scientist he is the author, Raymond D. Palmer, freely admits that his study has some limitations.

This review is limited by primarily focusing on vasoconstriction conditions caused by a stress response, and also by a lack of large-scale clinical trial studies to determine whether using novel combinations of vasodilators or anticoagulants with vaccines could reduce vaccine side effects, which may also assist in clarifying whether side effects were emanating from vaccines or conditions such as MSIMI. Further investigation into whether side effects could be attributed as a stress response is required.

I don’t mean to nit-pick but I think Raymond missed the most important limitation of his study.  THE COMPLETE F%&KING LACK OF SCIENCE!

Raymond made no effort to determine if the people suffering from blood clots were in a heightened state of anxiety.  I am certain that after the clots caused serious life altering problems their stress level went through the roof but there is zero evidence of elevated stress after vaccination or that the stress was caused by anti-vaxxers.

People were very stressed out over COVID.  That stress was cultivated by government.  For nearly a year we had a whole population of dangerous neurotics so stressed out they would tackle unmasked shoppers.  You cannot deny the extreme stress felt by millions yet we did not have a problem with blood clots until after they were vaccinated.  How did getting vaccinated increase the stress level of people who were so irrationally afraid of the virus?  Shouldn’t their stress level have gone down after they were “protected” by the “safe and effective” vaccine?

There is a lot of fake science out there.  Up until now to fake the science you had to fake the data, like the global warming crowd does.  Those days are over.  Apparently now you can just publish your conclusion and reference a couple papers that make your conclusions remotely plausible.  Long COVID is a serious problem; real science may never recover from it. 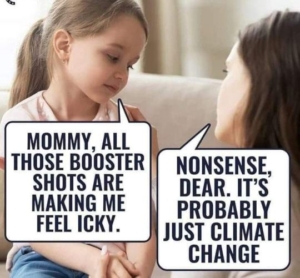 Subscribeto RSS Feed
Danielle Smith, a Breath of Fresh air in our putrid DominionPulling back from the Abyss
Scroll to top