When the mRNA vaccines were introduced we were told that they were +95% effective at preventing infection.  Anthony Fauci and other hoaxers went on television to claim the vaccines would stop the virus in its tracks.  This was a lie.  It is impossible for any intramuscular injection to produce immunity to airborne viruses.  These charlatans know that to be true, this is why pharmaceutical companies are working on nasal spray flu vaccines.  For immunity against airborne viruses you must produce an antibody response at the point of infection which is the airways.

Not only do the mRNA vaccinations not produce antibodies in the airway they also do not produce a full or permanent immune response.  There is no way the vaccine hoaxers did not know this.  The first lie to be exposed was the myth that the viruses would stop infection and transmission.  Every country with high vaccine utilization saw an explosion of infections that could not be hidden.  Not only did the jabs not prevent infection they seemed to facilitate infection.  Still we were told not to worry.  The jabs still prevented severe infection and death.  Despite the fact that vaccinated people were still dying from COVID few people question this lie.

If the vaccines don’t prevent infection but do prevent serious infection then infections may not go down but deaths should.  The ratio of deaths per infection should go down dramatically after vaccination programs start.  So did that happen?  No it did not and here are two examples illustrating the ineffectiveness of the vaccines.  The plots below display 14 day rolling average infection fatality ratios (the number of deaths in the previous 14 day divided by the number of new cases in the previous 14 days). 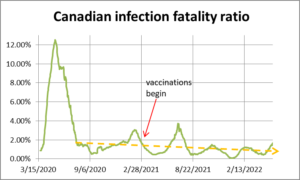 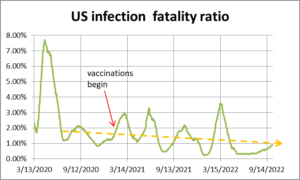 In both Canada and the US the first wave of COVID was quite dramatic although the high infection fatality rate likely had more to do with lack of testing than the virus.  We simply were no detecting the actual number of cases.  After the testing was ramped up we see the same pattern in both countries.  The infection fatality ratio was slowly dropping even before vaccines started.  The trend did not change with vaccination.  There are no obvious benefits to the vaccines in either country.

If we look at the world in total we see the same thing. 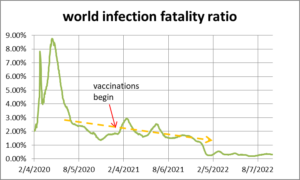 After the initial surge of infections and ramp up in testing the infection fatality ratio was already falling before vaccinations begin.  Vaccinations provided no obvious benefits.

Contrary to what Anthony Fauci and Theresa Tam want you to think there is no evidence that the vaccines prevent serious illness or death.  They are taking credit for a drop in serious infections that started before anyone was vaccinated.  The Jabs do not change your odds of surviving COVID at all but they do increase your odds of having a stroke or heart attack.  Why in God’s name are we still using them? 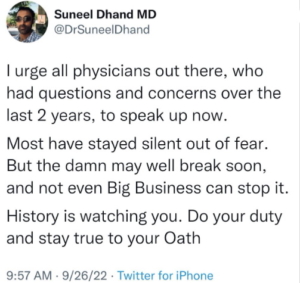