Yesterday Prime Minister Trudeau was forced to delete a false tweet.  That is a nice way of saying that he got caught lying.  This is not surprising given that Justin Trudeau is incapable of telling the Truth.  His deleted tweet was about Iran imprisoning 15,000 protesters.  I have no doubt that given the opportunity Iran would do this but the reality is that it did not happen.  I doubt Trudeau made this up on his own.  He was simply repeating a lie he had heard and accepted as truth.  The sad reality for Canadians is that Trudeau is just that stupid.  He has no critical thinking abilities and is therefore unable to distinguish fact from fantasy.

Justin is not just stupid.  He is so stupid he does not know he is stupid.  In fact he thinks he is quite smart, that is what makes him so dangerous.  Justin Believes every stupid idea implanted in his head is some sort of divine truth.  This makes him supremely confident.

His unwarranted overconfidence causes him to boldly make wrong decisions and then act on them.  That is why Canada is still pushing the COVID vax while the rest of the world is slowly banning them.

Canadian’s have paid a heavy price because Justin believed the lies about COVID.  Thankfully those lies are slowly being exposed and even Trudeau will eventually move on.  When he is done saving Canadians from COVID he will just pivot back to his favorite pastime of saving the planet.

Only exceptionally stupid people have the hubris to believe they can control the Earth’s climate and our boy Justin definitely fits that bill.  Justin truly believes that CO2 is destroying the planet and he is the only person on earth capable of saving the planet.  Too bad the entire global warming scam is just another lie that Justin is too stupid to understand.

I have posted multiple articles about the scam of Anthropogenic Green House gas warming.  In a nut shell it is not a problem for 2 simple reasons.  There is not much energy in the system available to CO2 and it does not take much CO2 to absorb it.  This morning I found a great article with a very simple graphic illustrating how little warming we can expect by increasing CO2 concentrations.

Beyond 300 ppm adding more CO2 really does not make much difference when it comes to temperature but it does make a huge difference to plant growth.  Plants stop growing at 250 ppm and grow optimally at concentrations higher than 1000 ppm.  Currently the earth is at 410 ppm.  That means we are only 160 ppm away from global starvation (250 ppm) but more than 590 ppm away from optimal crop yields (+1000 ppm).  Following the science should make us concerned that we do not have enough CO2.

I bet you have never heard the media voice that concern right?  The media is much like Justin; too stupid to discern fact from fiction.  Canadians have wasted billions on climate change because Justin repeats the lies fed to him by climate modelers.  When will Canadians realize when Justin speaks it is a lie?  Either a lie he has concocted or one he is simply repeating.  If his lips are moving he is lying because he does not have the intellectual capacity necessary for truth. 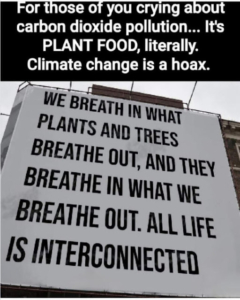