Canada has long been the wokest country on earth.  Canadian’s have been conditioned to accept everything the left utters without a minute of critical reflection.  The most ridiculous thing Canadians believe is that government will take care of them.  Frankly I find that bizarre.  Government is stocked full of people with no marketable job skills who would starve if they did not have access to our tax dollars.  Government does not take care of taxpayers, taxpayers take care of government.

In the Canadian ocean of left wing stupidity there was an island of sanity called Alberta.  In Alberta the government would leave you alone to be successful.  This Canadian safe haven eventually also disappeared.

Two things brought this about.  People from other provinces moved to Alberta to pursue economic opportunities not available in their current over governed province.  Unfortunately these people did not leave their destructive love of intrusive government behind when they moved to Alberta.  Alberta was tilting left while native Albertans were so busy being prosperous they did not notice the rapid growth of government and shift in political sentiment.

What followed was a succession of terrible governments culminated with the 1-2 knockout punch of Rachel Notley and Jason Kenney.  It looked like Alberta was down for the count but somehow Albertans have staggered back to their feet and are back in the fight.  First we got Rid of Jason Kenney.  Then yesterday our new Premier replaced Deena Hinshaw as Chief medical officer.

Albertans have now gotten rid of the 2 architects of COVID tyranny.  Once again Alberta is in a Class by itself.  I am not aware of any other place where the guilty have faced any repercussions.  Our American cousins just re-elected every COVID Nazis and no one has lost their job.

This is an important first step for Albertans but it cannot stop here.  The rot goes much deeper than these 2, and simply losing their jobs is not enough.  Much more needs to be done to fix what is broken in our province.  I am still not that hopeful it can happen but getting rid of the 2 least essential workers in the province is a very good start. 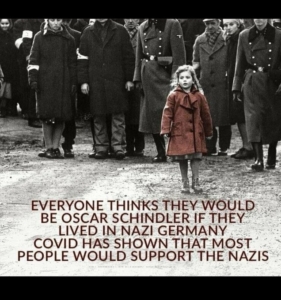