Australia went complete Nazis with COVID restrictions.  Vaccinations were mandatory and you could be confined in a COVID concentration camp for being a close contact of a known case.  People who never once tested positive were imprisoned without trial simply because they knew someone who had tested positive.  Who did not know someone who tested positive?

For nearly 3 years The Australian Government abandoned all common sense and then yesterday there was an unexpected glimmer of sanity.  The Australian government announced that no one under 30 could receive a 4th jab and no one at all can receive a 5th.

So what caused this rather dramatic policy change in Australia?  The government quotes the risk of Myocarditis and notes that 3 Jabs gives enough protection.  The first point is valid the second is complete fabrication.  The Jabs have never provided any protection they have always been 100% downside.

I doubt the government was worried about Myocarditis.  They have been successfully ignoring it up until now.  It must be something even more dramatic than the substantial risk of myocarditis.  If I was a betting man my money would be on the plummeting birth rates. 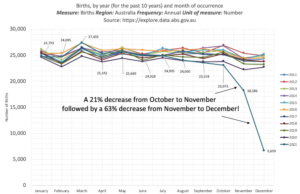 The drop in Monthly birth rates is so dramatic that a friend of mine thinks that it cannot be real.  I will admit that it is hard to believe but this is December of last year; they have had 10 months to get this data right.  Even Government employees have a hard time being that incompetent.  The number is so outrageously low that someone would have noticed and confirmed it before publishing it.  Did the government drop the vax to try and head off public anger about all the dead babies?

This could be the beginning of the end for the Jabs.  One of the most unreasonable countries in the world just dropped them.  Soon the only country with leadership stupid and evil enough to use them will be Canada. 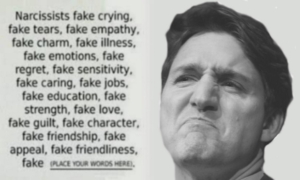 Subscribeto RSS Feed
Democracy could save us, to bad we surrendered it in 2020Thankyou Premier Smith
Scroll to top