Last week on the first leg of Fauci’s farewell tour Karin Jean-Pierre (KJP) had to jump in and save the little weasel from an uncomfortable question.  A reporter from the Daily Caller wanted to know about the origins of the COVID virus.  This was not on the list of approved questions.  Only questions that allowed Fauci to brag about how he saved the world from a virus and/or Donald Trump were to be permitted.

KJP was uncharacteristically aggressive when confronted with unapproved questions about the virus origin.  The normally befuddled press secretary looked like a mother bear protecting her cub.  It was the first time when confronted with a real question that she did not try to shrink into her binder of prepackaged lies.  What is it about this question that turned this stammering moron into a warrior?

It is not just the white house that aggressively shuts down any discussion about the virus origins.  UK government scientists also shut down discussions even though they had information indicating the virus was not natural.  Why do governments aggressively suppress data and stifle debate about the virus origins?  The evidence is overwhelming.  Any honest debate would conclude that this virus was engineered in a lab.  In a video post from a few days ago Dr. Campbell does a good job of discussing the evidence.

During the course of this plandemic governments have been forced to change the COVID narrative several times.  When they could no longer suppress data they had to spin it.  The one exception has always been the virus origins.  There has been no attempt pivot the narrative to explain the data.  The response is always the same deny and attack the messenger.

None of what happened in the last 3 years was accidental or a response to a viral threat.  The virus was always the excuse to set in motion a well thought out plan.  The end game was to eliminate individual rights and collapse economies.  The chaos would be used to justify digital vaccine passports/IDs and digital currency.  Step one of their plan was always, build a virus.  No one in government will ever admit that. 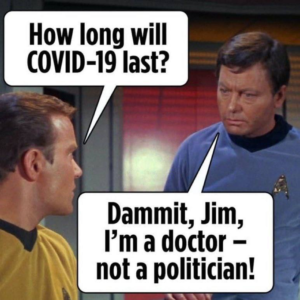