In a recent post I noted the reason for lockdowns was to save public health care.  There is of course another alternative.  We could just spend more money on public health care.  As I pointed out though this is never the preferred option.  From a politician’s perspective spending money on health care is a waste of a precious resource.  Every dollar spent on saving a life is a dollar that cannot be given to a friend for imaginary work.  Every dollar not spent on said imaginary work is 10 cents that will never be regurgitated into the politician’s bank account.

This might seem like the height of cynicism but how else do you explain this.  Canada’s deputy prime minister/finance minister Chrystia Freeland just budgeted 2 billion dollars to purchase shares in a company that does not exist.  Seriously, where do you think this money was really going to go?

10 years ago when Chrystia Freeland began her political career she had no money and no credit.  She was a 44 year old woman who could not buy a house without getting her father to co-sign the mortgage.  Chrystia Freeland is now a millionaire.  That is pretty impressive for a woman with no marketable job skills.  Where do you think she got all the money?  How much of the 2 billion was earmarked for her bank account?

Chrystia Freeland is the second most powerful politician in Canada and she is just as corrupt as Justin Trudeau.  I wish for once that a Canadian Politician would not exceed my worst expectations.  As long as the Trudeau liberals maintain power, I can’t see that happening. 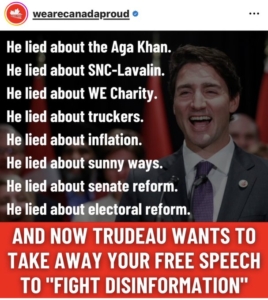 Subscribeto RSS Feed
The staying power of Fake ExpertsWhen will the Criminals be held accountable?
Scroll to top