The longer the COVID insanity lasts the more involved courts have become in this farce.  Multiple law suits in multiple jurisdictions have been working their way through the system.  The decisions that have been handed down are inconsistent to say the least.  Some courts side with the government and some side with individual rights.  In the US a federal appeals court has just sided with individual rights ruling that vaccine mandates for federal employees are unconstitutional.

The lack of a public vetting process has left Canadian courts hopelessly politicized.  Judges are appointed by politicians with little to no scrutiny and politicians in Canada are overwhelmingly progressive left wing idiots who make ideological judicial appointments.  As a result Canadian judges do not believe their job is to consistently interpret law and apply it evenly.  Instead they view their role as god’s representative on earth.  When mere mortals get it wrong judges set it right even if it means ignoring the law completely.  If someone must die to further their divine crusade then so be it.  That is why a transplant patient has already been sentenced to death by 2 Alberta courts.

Alberta Health Services (AHS) will not allow an organ transplant unless the patient has received the COVID Jabs.  Two levels of courts have upheld AHS’s decision.  Capital punishment is not legal in Canada but for some reason Alberta Courts believe that unelected bureaucrats should have the power to issue death sentences.

Unlike Alberta’s old Premier, the new Premier, Danielle Smith is not in favor of medical tyranny and is seeking a legal opinion.  I don’t know why she is bothering.  Outcomes in Canadian courts rarely have any connection to law.  What she really needs is a physiological assessment of the judge.  Is the judge in the minority that will follow the law or not?

The odds are not good for any Canadian judge to commute the death sentence for any member of the “fringe minority with unacceptable views” so I have a better suggestion for Premier Smith.  Fire the dipshit who made this rule and any useful idiot at AHS that enforces it.  That will get this poor woman back on the transplant list faster than any court will.

It is shocking how callous these AHS bureaucrats are with this woman’s life.  It is even more shocking that a court would uphold a vaccine mandate that requires her to take a treatment that isn’t even a vaccine and does not work.  The data is clear taking the jabs increases your chance of getting COVID without changing your chances of surviving COVID.  As I have pointed out on the blog multiple times the number of deaths per infection did not change after vaccine roll out.  In fact now that many Canadians have been boosted, the deaths per infection has been slowly rising for several months.  I doubt Pfizer will use that inconvenient fact in their booster add campaign.

The original 2 shot regimen did not work and the new bivalent boosters have been no better.  And just as the original jabs were all risk with no reward so too are the new bivalent boosters.  Even the CDC has been forced to admit the bivalent boosters could be causing strokes in seniors.  True to form though, The CDC still recommends that everyone take the boosters.  According to the CDC the risk of stroke is not a good reason to refuse medication that you do not need and does not work.  Thousands of Canadian Judges no doubt agree with that assessment. 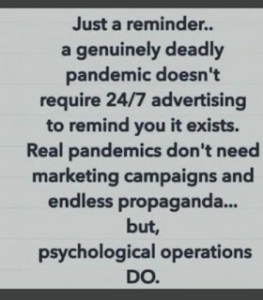 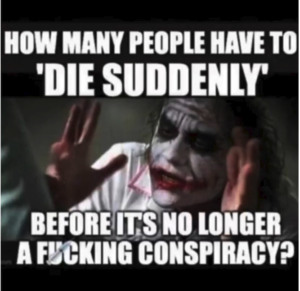 Subscribeto RSS Feed
When will the Criminals be held accountable?The WEF works because it is a Mutual Admiration Society
Scroll to top