On Monday I was vax shamed.  A young man I know but had not seen in weeks asked me if I had been vaccinated.  It was the first thing he said to me.  He knew the answer without asking the question.  A couple months ago we were discussing lockdowns.  He was all for them.  He knows I think that this “threat” is overblown, and the mitigations measures have been largely irrational and ineffective.

When I answered that I had not been vaccinated because I had no compelling reason to get vaccinated the shaming started.  Apparently, I was preventing society from reaching herd immunity and I should be more concerned about asymptomatic transfer.  As you might imagine I was unmoved by either argument.

In my young friend’s defense, he is a very bright and has looked at some data.  His problem is just that he is young.  Our Public school system indoctrinates children to believe in the benevolence of government.  It takes many years of separation from that before most people realize that the government is not your friend.  By the time you get to my age you understand how often the government lies and how egregious those lies can be.

The data my friend looked at was on lockdown effectiveness.  After the first lockdowns there were papers published that purported to show lockdowns were effective.  The problem with all those papers was the lack of data.  Many countries that appeared to have success with lockdowns really did not.  Their success was simply because the virus did not get established before the arrival of spring.  The next fall they employed the same strategies without success.

He did more than most; at least he looked.  He just did not look close enough.  Since his early skepticism he has been drinking the Kool-Aid without question.  That is unfortunate because it led him to the Vaccine, and he is still in his 20s.  In my opinion is should be a criminal offense to give the COVID Vaccines to anyone under 30.  To explain my point let us consider data from Israel.

I have discussed Israel before.  Israel had one of the world’s most aggressive vaccination programs.  They were vaccinating twice as fast as most other western countries.  Israel got there first so not surprisingly much of the data on adverse side effects is coming out of Israel.  Israel was one of the first to notice the problem of heart inflammation in young males.

Now data is coming out of Israel showing Higher than normal deaths among young men.  The deaths start to occur after the second dose.  See below. 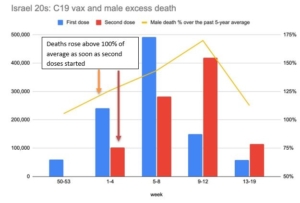 Here is a plot showing the cumulative impact compared to the average of the previous 5 years. 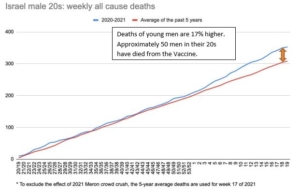 The mantra is that the risk of the virus is less than the risk of the vaccine.  Is that true?  Would the virus have killed more than 50 young men?  I could not find demographics of COVID deaths in Israel.  I can find them for Alberta.  In Alberta 0.48% of COVID deaths were People under 30.  All had serious health conditions.  If I apply the same percentage to Israel, then approximately 29 people of both sexes have died with COVID.  60% of COVID fatalities are men so approximately 17 Israeli men under 30 died with covid.  Presumably, they were all in poor health prior to contracting COVID.

The COVID Vaccines have already killed 3 times more young Israeli men then the virus.  Still these young men died to save others, right?  No, they did not.  Israel had already reached herd immunity naturally before the vaccination even began.  There was no one left to save.

What if Israel had not reached herd immunity?  Would it be ethical to sacrifice 50 young men to prolong the lives of seniors?  You might think it is heartless to say we are trading one life for another but that is exactly what we are doing.  Worse we are doing it without any guarantee it will save anyone.  What we are doing is no different than throwing people into the volcano to appease the COVID gods.

We have not yet seen this in Canada because we just started administering second doses to young people.  There are 4 times as many people in Canada.  If we have the same experience as Israel, we can Expect 200 men under 30 to die from the vaccines.  I hope my young friend is not one of them. 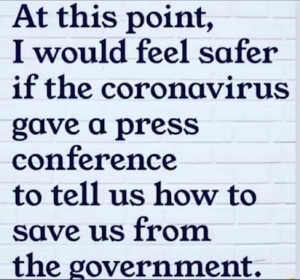 Subscribeto RSS Feed
If COVID Vaccines are so Wonderful why Bribe People to take Them.Canadian Governments are now Imprisoning Christians and Political Opponents
Scroll to top