I found this video in which Dr. Robert Malone is discussing Mass Psychosis.  This video has nothing to do with COVID and everything to do with COVID all at the same time.  COVID is the disease caused by the multiple variants of the SARS COV 2 virus.  COVID on its own was really not much of a problem.  The real problem was how governments used COVID fear to drive a mass Psychosis.

Dr.  Malone describes quite clearly how we got here and what we can do to turn this around.  If you are American this video is full of hope and an uplifting end to a very tyrannical year.  There is a very good chance that America can recover from this.  That is not the case for Canadians.  Dr. Malone’s recipe for shaking off this particular mass psychosis will never work in Canada.

Canadians are not Americans in 2 very important ways.

The Balkanization of Canada did not begin with Facebook; its origins stretch back decades to the first reign of Trudeau Terror.  Canada’s original Trudeau mistake aggressively promoted multiculturalism, the most destructive liberal policy of all time.  Pierre Trudeau thought that Canada should be nothing other than a hotel that issued passports.  A hotel where some guests were never asked to pay their bill.  Instead their expenses are added to the bills of other guests who are threaten with imprisonment if they refuse to pay.

When I was young I learned in school that the US was a melting Pot and Canada was multicultural.  Off course the left wing ideologues running Canadian Schools would not pass up a propaganda opportunity.  I wasn’t just taught that Canada and the US had a different approach.  I was taught that the melting pot model was inferior.  It was not right to ask immigrants to assimilate and adopt the new country’s culture.  This never made sense to me even as a teen.  I would ask the same unanswered question, why would someone want to immigrate to Canada if they did not want to be Canadian?

An even better question would have been why would Canadians want to admit immigrants that did not want to be Canadian?  Questions like that were never asked because questioning multiculturalism was somehow racist even though culture has nothing to do with race.  Instead we implemented this insane policy which resulted in millions of hyphenated Canadians.

We pursed multiculturalism with such zeal that we were willing to set aside our own laws to facilitate the complete destruction of Canadian Identity.  We now have polygamists complete with child brides in Canada.  Polygamy and statutory rape are illegal for Canadians but not for Hyphenated Canadians.  Hyphenated Canadians are only subject to the laws of the country they fled, even when those laws contradict Canadian law.  That is what 50 years of multiculturalism has brought us, Canada is nothing more than hundreds of separate groups pursuing their own self-interest.  It is simply no longer possible to bring Canadians together under a common cause.

Canadians Have always shown that they are comfortable with Tyranny.  There has been little to no pushback on the criminal behavior of our Premiers.  As mentioned previously I have had conversations over Christmas with people who see no problem with our governments eliminating rights.  One person told me that laws always change, we just need to wait and all these COVID rules will just go away and be replaced with different rules.  Only a person completely ignorant of history would say this.  Laws do change but always in one direction.  Governments only give up power when they are forced to.  This usually takes a civil war so it is always best to not let government overstep in the first place.

It is not surprising that Canadians don’t know history.  It is no longer taught in school.  Instead we have social studies.  Social studies is bastardized history used to promote left wing ideology.  It was in social studies that I learned asking immigrants to assimilate is bad.  Social studies also taught me that there are far more pros than cons when it comes to communism.  Capitalism comes with only drawbacks.  I took social studies for 3 years in high school and I never learned a single thing about history that did not somehow re-inforce those 3 points.

Canadians allowed the lunatic left to take over the public school system 5 decades ago.  Instead of educating children we indoctrinate them.  We have now graduated 2 generations of morons who fervently believe in the divinity of government.  They cannot recognize tyranny even when it forces a muzzle on them while they present their papers to the vaccine police.

The road ahead will be much more difficult in Canada.  In Mass Psychosis facts don’t matter.  When I try to present facts to a hypnotized COVIDiots they generally recoil in terror.  Trying to focus their fear on a common enemy is also problematic.  There is little to no commonality in Canada from coast to coast.  The government is clearly our biggest enemy but few Canadians can see it.  They revere government.  Their indoctrination is just too complete.  I weep for my country.  We are destined to be the last place to shake off COVID Tyranny.

Happy new year to all my readers.  To my American readers please keep fighting.  Eventually Canada will be forced to follow you back to freedom. 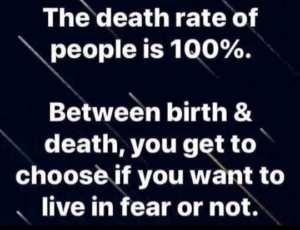