A well-known nurse practitioner in the UK has issued a statement calling for a suspension of the COVID vaccinations.  The video below is Dr.  Campbell reading the statement.

Eminent nurse practitioner, academic and author @Johnincarlisle calls for a suspension in the roll out of the covid mRNA vaccine pending an inquiry because of serious harms.

The Jabs have ruined a lot of lives.  This is an uncomfortable truth for vaccine advocates.  They know it needs to stop but they want it done in a way that deflects blame.  The narrative they want to run with is that conditions have changed.  In 2021 vaccine rewards far outweighed the risks but now that the virus is no longer as deadly the risks do not justify the reward.

This is of course complete bullshit.  The rewards of this vaccine never outweighed the risks and that ratio has only gotten worse with time.   The people who pushed this vaccine are guilty of murder and they know it.  They are desperate to avoid prison and their defense will be that they only used the vaccines until they were no longer needed.  An AstraZeneca executive tried to invoke a similar defense while being roasted by a handful of honest members of the European parliament.

The more "science" is at odds with reality, the harder it is to maintain its lie.

We've finally hit the point even mass-censorship won't cut it. I can only imagine how the vaccine pushers who have been shielded from a real debate (like Hotez) will handle being held accountable. pic.twitter.com/b1HiDiqE5w

Christine Anderson asked who lied and the executive answered no one lied.  The AstraZeneca rep stated these dangerous Vaccines saved 20 million lives.  She even quoted the study that she says proves it.  The plot below is from that study. 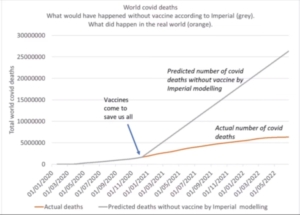 Does that plot look like proof to you?  Does it even look like science?  Do you think that if vaccines had not comes along the virus would have suddenly become more dangerous and continue killing people unabated forever?  No virus in history has ever done this.  Every new virus does the same thing.  Vulnerable people die and then as the virus moves through the healthy population fewer die.  People develop a tolerance and the virus mutates in to a more virulent, less deadly, form like omicron.

The vaccines did not help with COVID.  The figure of 20 million saved is complete fiction.  Vaccine advocates are grasping at any straw to deflect blame.  Don’t let them get away with it.  They must be punished for their crimes. 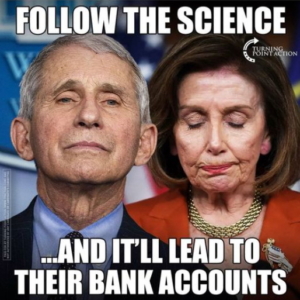