I had surgery on my ankle once to repair a tendon injury.  A few weeks after the surgery I had to make a long (12 hour) flight for work.  I was cautioned about the increased risk of blood clots from being at altitude for an extended time.  A compression sock was recommended to help circulation.  This was about 15 years ago.  So 15 years ago we knew that blood clot risks were higher if you spent a lot of time at high altitude.  Good thing that we are mandating the clot shot for pilots, right?

The official narrative is that blood clots are a rare side effect of the jabs.  Thanks to the work of Dr. Hoffe we know that is not true.  The pre and post jab D-dimer tests he performed prove that clots are the rule not the exception.  If you get the shot you will get clotting, the only unknown is whether the clots will be large enough to cause a problem.  Being at altitude increases the chance that they will be.

In Theory these shots will be a problem for the airline industry.  Now it seems the theory has become a reality.  Stories are leaking out that a completely healthy Delta airlines pilot died in flight a few days after his second jab.  Follow the link for the video.

The Copilot was able to make an emergency landing.  So no one other than the unfortunate pilot was injured by his vaccine.  This could have been a disaster and it was completely predictable.  In fact 3 weeks ago and air force doctor did predict it.  That led her to ground all of her pilots.

AFFIDAVIT OF LTC. THERESA LONG M.D. IN SUPPORT OF A MOTION FOR A PRELIMINARY INJUNCTION ORDER – Deep Capture

Once again, while we were following the science, we managed to completely ignore all the science.  The science says that this vaccine increases risks for people who are at very little risk of the virus.  As the lieutenant Colonel points out most of her pilots are under 30 and in peak physical condition.  For them COVID was not a problem.  A blood clot induced heart attack at mach 1, on the other hand, is quite a serious problem.

Thanks to the moronic man-child no Canadian is allowed in the air without the jab.  This is to keep us safe.  How safe do you think the vaccinated passengers will feel as the plane crashes?  At this point there is only one thing that will make Canadian’s safe.  Our safety would be guaranteed if every Canadian politician died from the vaccine.  Too bad most of them likely did not take it. 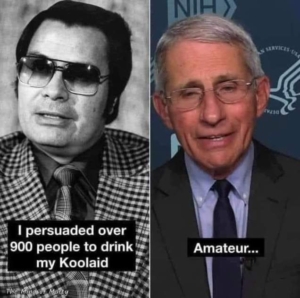