Today is Earth day.  It is a Day we are supposed to reflect on our impact on the planet.  When is Civilization day?  We really should set aside a day to reflect on how politicians are destroying civilization.  I think Jason Kenney’s or Justin Trudeau’s birthday would be a logical day to choose.

My family just finished observing our first civilization day.  After careful reflection, my daughter said something incredible to me.  She is considering international work.  Her reason?  She just wanted to go somewhere that there was freedom.  I could not argue with her logic.  There are many places with more freedom than Canada.

10 years ago, when you thought of Freedom you thought of Canada, the US, or western Europe.  How times have changed.  The once Free western world is almost entirely under Tyranny right now.  Ireland just passed this new law. 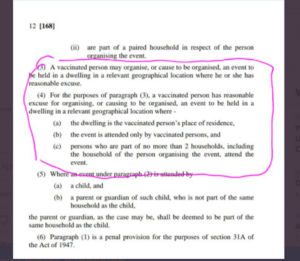 If you are vaccinated, live in the right geographic area, and have a reasonable excuse, you can now meet with friends.  Can’t you just smell the freedom emanating from that law?  This is from a country that has seen almost no excess deaths from COVID.  Over the last 7 weeks Ireland has experienced far fewer than normal deaths.

In Canada, our petty Tyrants do not even bother passing new laws.  They now just rule by royal decree.  As I discussed yesterday, Canada had a completely normal Cold and Flu season.  Despite that, 4 provinces are now putting restrictions on movement.  The restrictions are very specific though.  They only apply to Canadian citizens.  International travelers and illegal immigrants are still welcome.  These days, in Canada, a Canadian passport is the equivalent of a yellow star.

Of course, we are told freedom is impossible because of all the cases.  Many Provinces like Alberta are seeing very high numbers of cases. 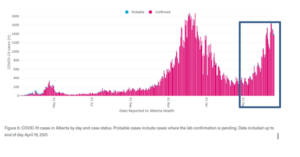 There is one pertinent detail the government no longer likes to talk about.  We have a lot of cases but almost no deaths. 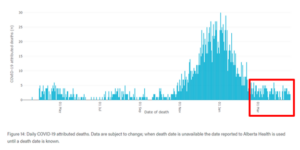 Alberta had no excess deaths for the first 36 weeks of the lockdown.  COVID simply did not get established in Alberta before spring arrived.  In the second season of COVID, Alberta did see excess deaths but by the first week in February everything was back to normal.  Yet here we are still in lockdown. 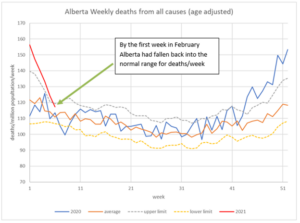 By mid-February cases had and deaths had both fallen dramatically.  This was a real problem for the government.  People might get the crazy idea that it was over.  Right on cue our cases began to soar.  Until mid-February cases and deaths rose and fell together but that is no longer the case.  There are only 2 possible explanations.

I grew up during the cold war.  The west always represented freedom and the east represented evil tyranny.  The situation is now completely reversed.  While Canadians are under the jack boot of rogue government this is what it looks like in the old Soviet Union.

"Deadly panxdemic" Moscow Russia 13/4/21 when Russia has such Freedom you Realise the uk is now a Police State and Under Real Communism pic.twitter.com/7mhn9rpySu

We did not defeat communism during the cold war.  We just convinced it to leave the east and move to the west.  My children have some hard choices to make. 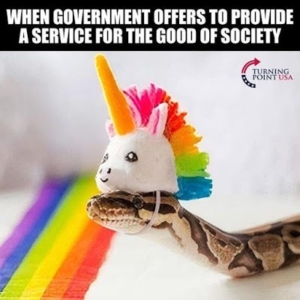 Subscribeto RSS Feed
There is a Glimmer of Hope in Ontario The Calgary Sun, Acknowledging the Obvious
Scroll to top