I wish I did not have to say I told you so, but here it is.

For months I have been telling people that the way the jabs work there is no way that they are not temporary.  Pfizer and Moderna now admit that the jabs work for 6 to 8 months.  Real world data indicates it is closer to 4 months.

Everyone involved in this crime always knew this.  They just didn’t bother to tell you that fully vaccinated means multiple booster shots every year.  The province of British Columbia is starting a booster program on the same day they introduced vaccine passports.  Israel is on their 3rd shot and are preparing a 4th because 3 shot people are already turning up in hospitals. 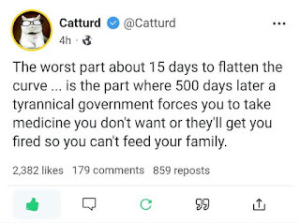 Of course there are still people not willing to admit what a blunder this is.  The following is an excerpt from the new article.

“Philip Krause and Marion Gruber, co-authored a report this week that concluded there was not enough evidence to justify a booster program.”

Philip and Marion are missing the point completely.  There was never enough evidence to justify the first 2 shots but we did it anyway.  Now we are starting a third with even less evidence.  We are getting progressively less intelligent.  Add that to the list of vaccine adverse events.

The real crime is not the non-disclosure of the jab’s temporary nature.  That is small potatoes compared to concealing the jabs damage your immune system.  ADE might just be the tip of the iceberg.  Here is a video of Dr. Cole explain that the Jabs destroy killer T cells necessary for a healthy immune system.  He is already seeing an increase in other infectious diseases and cancer.

This doctor trained at the Mayo Clinic and runs the largest independent testing laboratory in Idaho.

Listen to what his lab testing is showing: pic.twitter.com/VtdjQMluzF

This crime is enormous and they are actively covering their tracks.  The push for jabs and the draconian imposition of Vaccine passports does just that.  If everyone is vaccinated it will be hard to prove what they did.  The crime will be apparent if un-jabbed remain healthy while jabbed suffer from serious, mysterious, maladies.

The number of people involved in this crime is staggering.  In this case the media is cooperating by filming crisis actors.

Investigators call into hospital asking for the name of the people featured in a news broadcast only to find out they weren't admitted to the hospital!

Even the hospitals are involved.  These doctors and administrators are caught discussing how to falsify the numbers to scare you in to getting jabbed. 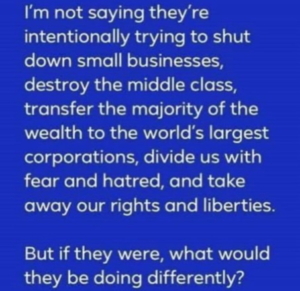